The Food Leadership Programme: Securing the future of Tombreck farm

What if you’re a farmer approaching retirement age without succession arrangements in place? Sue Manning and Tober Brown, the current owners of Tombreck Farm in Perthshire, are facing this dilemma – as do many farmers in Scotland. At the beginning of December, a group of participants from the 2015 Nourish Food Leadership Programme visited the farm to learn about their exciting vision to develop a community-based model of land management.

The Food Leadership Programme is a residential training course Nourish ran in the summer of 2015 for emerging ‘food leaders’ in the Scottish food movement. Food producers, bakers, chefs, activists, educators, and foragers came together for five days to explore “How can we, individually and collectively, help transform the food system in Scotland and beyond?” Since then, with logistical support from Nourish, the group has been organising subsequent gatherings in different locations and on a variety of topics – peri-urban farming and the Edinburgh Food Belt, farm animals & the food system, scaling up urban food production and baking for community. With support from the LAND Group Visit Scheme run by the Permaculture Association, the group descended on Tombreck Farm in the first weekend of December 2016.

The weather was kind and on Saturday a warm sun cleared the morning mist, revealing stunning views over Loch Tay and the surrounding hills. Tombreck is a 240-acre hill farm with an on-site farm shop selling some of their produce (meat, eggs, fruit and preserves). They have a small breeding herd of Kunekune pigs reared in the woods, but most of the land is currently let out for seasonal grazing, mainly for sheep. Tober grew up at the farm and inherited the land in 1997 to find the woods over grazed and the land neglected – the first many months he dedicated solely to putting up stock fences and clearing rubbish off the land. How could a farm, which at one time supported several families and now failed to support even one, be vibrant and productive once more?

“To work as a farm, and to diversify into other activities so as to include other people, and to provide housing and employment at a sustainable level.”

In the past thirteen odd years the number of households has indeed increased from one to eight, a mix of owner-occupied and rented social housing, the number of people from one to twenty-five including children, and several small or micro-businesses are operated from Tombreck, including the Big Shed eco-building where the FLP gathering was hosted. 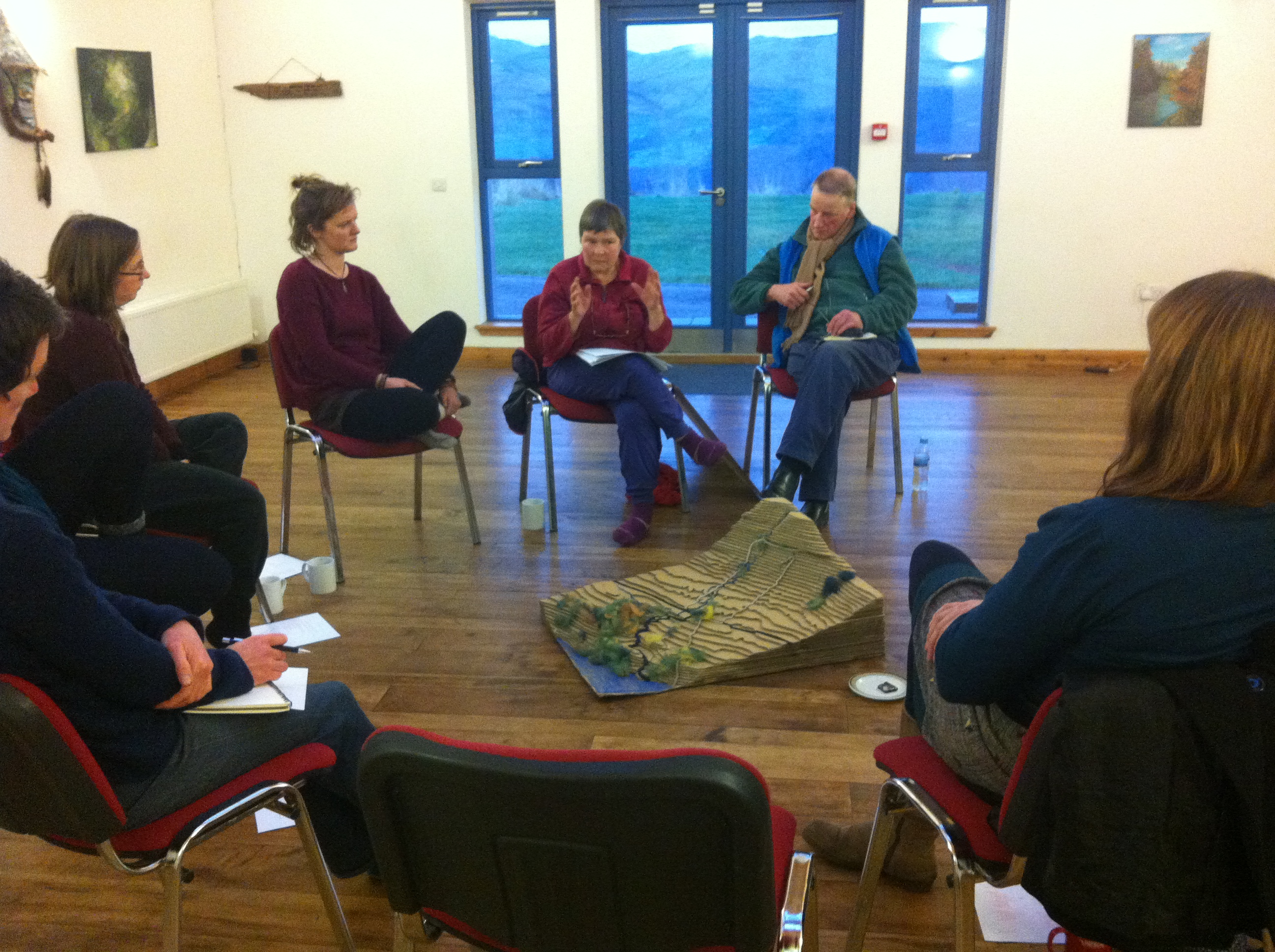 With detailed maps and 3D models Sue and Tober explained to us how they hope to further develop the land into a ‘Permaculture Farm’, with a number of small productive fields within a woodland landscape while reducing the numbers of sheep and introducing cattle. They have recently been awarded a grant from the Scottish Forestry Grant scheme to plant approx. 80,000 native trees on Tombreck over the next two years. Planting trees is Tober’s big passion: “It’s the only thing I do that I know for sure is good for the planet”, he explains with twinkling eyes. Later, during a farm tour, he proudly shows us some of the mixed woods with fruit and nut trees he’s already been developing on the land over the years – after having let the pigs do the preparatory work of loosening up the soil and removing the bracken.

For Sue and Tober, central to becoming a Permaculture Farm is encouraging and enabling individual growers or “land partners” (with a focus on young people), to create micro-businesses and to live and work on the farm. They want to see the land “really worked” once more. Besides epic tree planting, the next steps are to improve drainage and soil quality of the fields, to build farm infrastructure and buildings and to get water to the fields. But most of all: to find people who want to work on the land!

To continue and secure this vision into the future, Sue and Tober are looking at the possibilities of selling or transferring some or all of the assets of the farm into some form of community ownership. They are inspired by Fordhall Farm in North Shropshire, England, which became the first community-owned farm in the UK in 2006 –it is owned by more than 8000 shareholders from across the UK and even further afield. 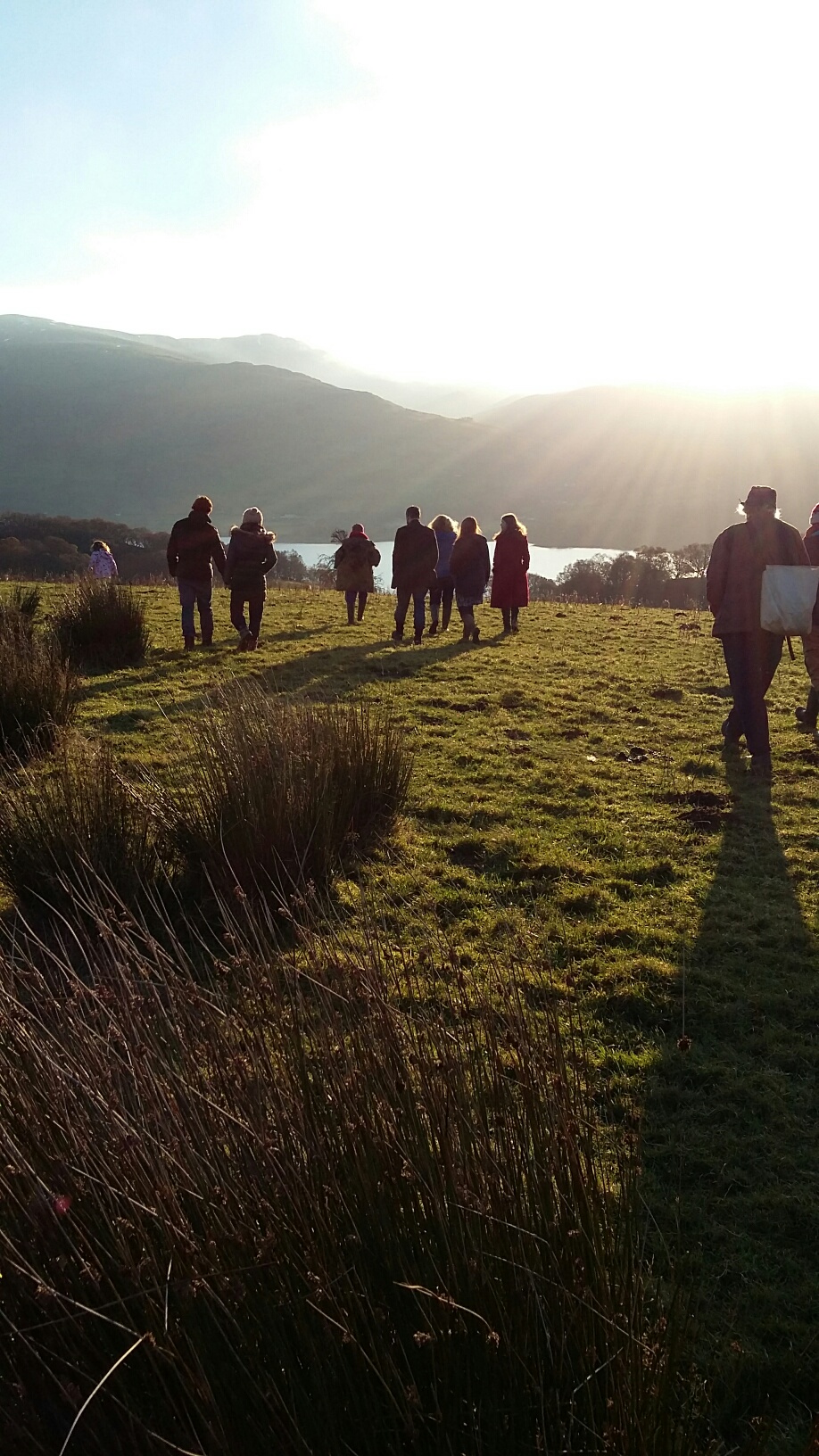 Big questions remain, not least of all: to whom should the farm assets be transferred? There are now many people with a stake in and a relationship to Tombreck: the current owners and their family, the Tombreck residents, the (yet to be found) people who’ll be working the land, people in the local area and wider supporters. How and to what extent could the farm be owned and managed as a collective? And where does that leave the farmers? They care deeply about the land and its future and want to stay involved as long as they can. Tober would do this “even if he’d have to live on porridge”, Sue assures us. She herself is keen to “play with the horses more” and, as an architect, she would like to lead on designing the future farm buildings. One of the options they are exploring is setting up a “multi-stakeholder cooperative”, of which they themselves would be members.

At this point, what they urgently need is development money – “more money to find out more things”- including legal and financial advice with regards to the asset transfer and the different ways of doing this: they could gift the land to “the community” (which will first need to be clearly defined), the community could buy the land (perhaps through grants or crowd-funding) or they could split the land in some way.

What is sure is that whatever avenue the Tombreck community decides to pursue, they will be pioneers who will set an interesting example for other farms facing succession dilemmas. Watch this space!

You can read in more detail about Tombreck and plans for its future in this discussion document.