The first weekend of, dreich and blustery as we might have known, saw the latest gathering of participants in last year’s Food Leadership Programme, a chance to support and galvanise one another in working towards a better food system in Scotland and to share ideas with others working hard to do so. The previous, equally weather-beaten occasion had thrown up persistent questions of how to increase the visibility of alternatives to the current food system so we headed this time to Glasgow to find out how successful efforts there had been in bringing about change to the urban food environment.

What potential do urban community food projects have, we asked, to change the current food system, and what are the challenges to scaling up in order really to feed people locally? First stop was Locavore, where Reuben Chesters talked through the challenges the social enterprise had faced in scaling up. Since 2011, Locavore has grown from a tiny community hub promoting local food growing to its current larger shop on Nithsdale Road with a thriving veg box scheme and two urban growing spaces. They are now expecting to open a sustainable alternative to a supermarket. As the name suggest, the project’s primary aim is to promote local food but Reuben admits he realised early on that there was nothing truly local for him to source; growers in East Lothian and Fife are still his ‘local’ suppliers. The original shop, he said, was a financial disaster. It was not until last year that it became viable. This coincided with the shop no longer being “just and exhibition of Scottish food” but starting to play into the market; rather than forcing an ideology, Locavore began to provide what people wanted day-to-day. About a year ago, Reuben introduced ‘foreign fancies’ to the shelves, still marking the food miles on each product but now with the word ‘Lots’. Tinned tomatoes are now a bestseller. There is now more focus on organic products, and making them more affordable, indeed competitive with supermarkets. We questioned as a group whether such a market niche was achievable with local produce. 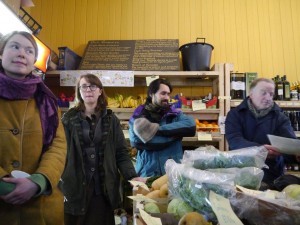 Certainly, the project has not given up on local growing. Two years ago, its 8.5 acre plot in Neilston was acquired to combat the lack of local organic supply and to fill any gaps in sourcing. Even more recently, the croft in Queen’s Park was developed to encourage people to grow to sell, with Locavore advising and buying. The ‘top’ grower last year achieved a total farm gate price of £800 for a 24m2 plot but Reuben seems optimistic this could improve. The shop spends £8,000 a month on fresh produce and he believes producing 10% of that on the croft would be easy, and lucrative for someone. However, he was bemoaning a lack of expert growers as he has struggled to fill growing posts even if they are well-paid. There is a big jump, it seems, from community gardening to commercial viability and it is one which people lack both the confidence and the skills to take – a number of our group among them. This led to discussion of the need for an intermediate step that gives growers a chance to understand markets and yield predictions and there was a sense that Locavore is now in a position to offer that, with a better understanding of productivity and market values developed over the last two or three years. Despite lessons learned and compromises made, there is little chance Reuben has fallen prey to the market more than is necessary to build what he set out to. He maintains that it takes a few people to pioneer a change in the market and the rest will follow, citing the Unicorn Grocery Workers’ Co-op in Manchester which now many use as a springboard for starting their own projects. He may have let his ideals suffer to seek viability in the short term but Reuben knows that ultimately there is scope for his ideology to work at scale. 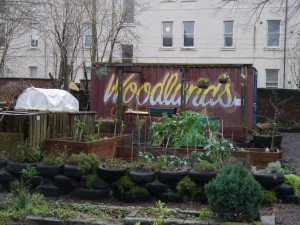 Reuben also offered the controversial advice to avoid funding as much as possible. This is, it seems, key to Locavore’s success and sustainability but the group questioned its logic (over a mindfully-sourced and delicious lunch at the Project Cafe) – surely this puts such ventures at even more of a disadvantage in changing the current system, which itself benefits from immense subsidies? The visit to Woodlands Community Garden that followed was perhaps testimony to this. Garden worker Jerry Hutchinson who welcomed us explained how the garden had taken three years since it was leased from the council in 2010 to “get under way” and in fact water access had only been installed that very week. The project, part of Woodlands Community Development Trust, relies on funding, currently in large part from the Climate Challenge Fund. Half the garden is devoted to individual plots which are leased for £10-20 a year, and the other is reserved for communal growing that goes towards the project’s community cafe. It is, as is common with such projects, at least as much a community space as a growing space. But development worker Vicki Fleck was positive about its role in creating a different food culture in the area because “it’s here, it shows what is possible”. It is indeed a surprising, attractive, quirkily-designed anomaly in the built-up environment. She was confident there were other similar spaces across the city with potential for being nurtured and that Woodlands staff could offer their experience to help that. Encouraged, the group suggested that Woodlands could also aim to occupy that critical gap between community and commercial growing and although there is little scope for doing so in the current space, Vicki seemed optimistic about the idea, and interested in cooperating with Locavore to further it.

Travelling between venues during the day, we tried to examine the existing ‘foodscape’ in the city – current, past, potential: cocktail bars and grills, supermarket chains, former high streets now home only to betting shops, brownfield sites, rows of shops selling kitchens but nowhere nearby to buy food. The scape was nowhere more sobering than the site of the day’s last visit in Milton. The area around the North Glasgow Community Food Initiative (NGCFI) hub is described as a “food desert” by Roland Playle, a project coordinator. 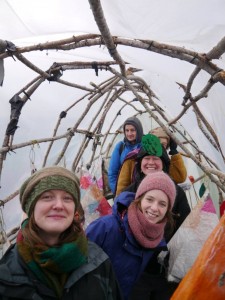 Fresh food is unavailable for perhaps a mile radius; there is a community cafe but it serves burgers and chips. The suburb was originally poorly built to house those living in Glasgow’s slums and still suffers from high depression rates and worklessness 115% above the Scottish average. Initially, the NGCFI, which is now 12 years old and is spread across several locations, was simply to provide food. Now, it has become more about community development and health in a wider sense, and food arguably plays a secondary role. When the garden at Milton started producing, the cabbages grown “couldn’t be given away”, Roland said, but there was an expanding volunteer community interested in landscaping and construction. He says working here has been valuable in informing himself on all sorts of issues beyond (or perhaps contingent on) creating a better food culture. But the theme of commercialising community growing once again came to the fore: if the garden could offer financial incentives to the community could it become more productive, encourage a change in eating habits and get people into work all at once? Roland emphasised the need to patience in such projects, and flexibility. In a similar way to Locavore, the NGCFI has altered its aims, perhaps lowered its aspirations, to meet demand. It is about achieving sustainability without losing sight of a principled vision.

So is there scope for bridging between these worlds? Locavore states that their vision is to create a replicable model and Roland suggested there are grounds for optimism, offering the idea of Reuben bringing his experience to help create a market garden in Milton. Already, agreements are being reached between Cyrenians and community gardens in West Lothian and beyond to supply their veg box scheme with a certain product, encouraging sustainable and viable scaling up. It was, I noted, as many of us swapped emails with Jerry at Woodlands, once again inspiring to be a part of a group that is actively pursuing this possibility for exchange and, ultimately, change.