On the road to a Good Food Nation?

Following on from the Scottish Government’s Good Food Nation consultation, the Scottish Food Commission has now released an interim report. It introduces a refreshed vision statement, outlines the use of indicators to monitor progress in key areas of food policy and announces plans for “creating a movement for change”. Nourish welcomes some aspects of the report; but we also question whether enough is being done to generate significant change in our food systems.

The development of indicators ‘to monitor progress towards the Good Food Nation vision’ is welcome. If we are going to transform Scotland’s food system we need to understand where we are at, where we aim to be and what progress we are making towards our goals. The report outlines five headline objectives – Social Justice, Health, Environmental Sustainability, Prosperity and Knowledge – along with two selected indicators in each area. Some indicators are good; for example, it’s great that we will be measuring levels of food insecurity (rather just measuring food bank use). It’s also good to measure the proportion of jobs paid the living wage in the Food & Drink sector, as it will help drive progress towards making better quality jobs in the sector. However, other proposed indicators include ‘levels of knowledge about food in the community’ which seems poorly defined and particularly difficult to measure. 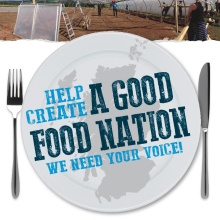 The report talks of creating a movement for change, catalysing a sustained change in food behaviours and allowing people from all walks of life to feel part of the Good Food Nation journey. However, the Food Commission has so far failed to create opportunities for public engagement with its work and the report seems disconnected from the grassroots movement already beginning to thrive in Scotland. It’s not clear what the next steps are, and how this sustained change will be delivered. Worryingly, the focus of the Commission’s work appears to be on influencing individual behavior change. While there is a place for individual action, Nourish thinks that we need less finger-wagging and telling people what to do and more emphasis on joining up government policies and changing the overarching systems within which people make their choices. This should include looking at using public money to create incentives for people to make, buy, serve and eat healthier, more sustainable food.

In developing its action plan, and any movement for change, the Commission must provide opportunities for public input and influence, ensure effective scrutiny of government actions and priorities, and advocate effectively for sustainable, healthy food. Its current vague, non-statutory status is hampering its ability to carry out these roles. The current report contains some useful first steps, such as the development of national indicators. However, without more “spine”, the Commission will remain a lost opportunity, full of good intentions but without the ability to effect the wholesale change needed to make us a Good Food Nation.