“We are fed up!” 20,000 march against industrial agriculture 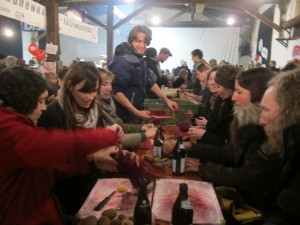 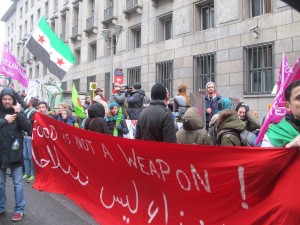 What links a small-scale German dairy farmer, a radical vegan, and Syrian solidarity activists? Perhaps quite a lot actually, but rarely do they take to the same street with the same message: We are fed up with this food system.

On Saturday, over 20,000 people marched through Berlin’s streets. With the temperature hovering around -4 degrees, and the clouds grey and bleak, it could have been a miserable affair. The reality was far from it – creative characters mingled with hard-hitting banners, bright colours were apparently obligatory, energetic chanting and rousing Samba rhythms kept the spirits up in spite of numb finger tips. 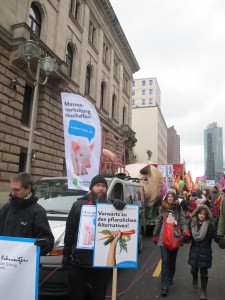 This is the 6th year of a demonstration, which defies the cold weather and January fatigue to shout loud and clear that business as usual in the food system is not an option. It is timed to coincide with the opening of the world’s largest agricultural trade fair, which takes place in Berlin every year, and is inappropriately called ‘Green week’.

The demonstration brings together – and makes visible – the alternative. Where an international trade fair assumes food to be a commodity, on the streets the message was very different: We need a paradigm shift, and a food system that values people and the planet. We cannot afford intensive agriculture – it is costing the earth, and the wellbeing of farmers, animals, and citizens.

The march is organised by a broad coalition of more than 50 farming, environmental, animal rights, and consumer groups. It is led by a procession of tractors; farmers come from all over Germany with their mighty machines draped with banners against TTIP and for fair prices. They drive past the agricultural trade fair and kick the march off in style with horns beeping and cheery waves. 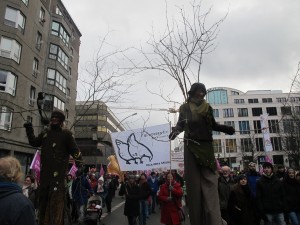 In addition to the demonstration and rally there is a ‘Schnippel Disco’ the evening before – think mass vegetable pealing and chopping, with a decent quantity of German beer and plenty of dancing too. All the veg makes a much needed warm meal after the demo, which fuels an afternoon of project sharing and network building.

There was a real sense of disparate groups coming together, connections being formed and strengthened, and energy being gathered for the long fight against industrial agriculture. Perhaps it’s time we took to the streets of Scotland…