As storm Desmond descended on the 5th of December, a gathering was taking place at Whitmuir Farm just south of Edinburgh. The yurt on the hill, where we sheltered, shook so much in the wind we could barely hear each other speak. Fearing loose branches from the trees around us, we hurried to the farmhouse. Soon after settling there, Desmond caused a power cut. We huddled around the kitchen table, our faces illuminated by flickering candle light. Storms, paradoxically, can create the best forms of cosiness.

What was the occasion? This July, Nourish ran the first Food Leadership Programme, gathering 26 people from all over Scotland with food the common denominator. The aim: To collectively gain a deeper understanding of the food system and change the way we do food in Scotland for the better. Of course, despite the jam-packed programme, five days wasn’t nearly enough. Keen to continue learning, we now meet every two months to dig deeper into different themes, catch up on developments in our network, and discuss strategies to make change happen. 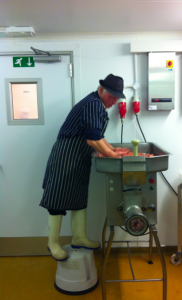 In September, we spent a sunny weekend in Damhead at the smallholding of participant Julian Holbrook, to learn about peri-urban farming and the potential for an Edinburgh Food Belt. With the seasons marching on, we braved the storm this first weekend of December on the farm of Pete Ritchie and Heather Anderson. This time to reflect on our relationship to animals in the food system, considering environmental, ethical, nutritional and social aspects. On Whitmuir Farm, Pete and Heather keep pigs and chickens organically, based on the premise of allowing animals to thrive. They also invested in an on-site butchery in order to process their own meat rather than see off their animals leaving the farm in a lorry, as is normal in livestock farming. We spent Saturday morning learning from, and admiring, Whitmuir’s artisan butcher Robert at work. While showing us how to make sausages from a shoulder of one of Whitmuir’s pigs, he told us his stories from more than 40 years in the trade. 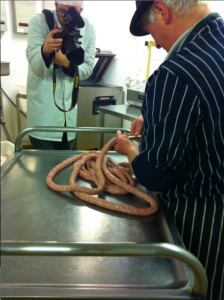 Working the meat with his skilled hands, he reminded us of a sculptor. “Sometimes I don’t understand why on earth it’d be interesting for people like you to look at me working! There’s really nothing special about it.” He remarked. “But then I remember how much I enjoy watching another tradesman at work…” We left the butchery impressed by Robert’s craftmanship but also wondering about the future of his trade, with industrialised meat production having become the norm and “conventional” meat prices at an all-time low.

Devouring Robert’s sausages the next morning, however, we became hopeful about both butchery and organic husbandry again: if only more people had the chance to taste these products… Whitmuir is quite unique though in having established an on-site butchery and has done so through sheer determination and ideals. The huge financial investment needed to set up a fully equipped butchery is a big barrier for small producers. On top of that, the piles of forms and documentation to comply with regulations on hygiene and organics were daunting to say the least. There is clearly a lot of work to be done to ensure the burden of changing the way we eat meat does not fall solely on producers. Plus, there’s a need to grow the demand and retail possibilities for good, locally sourced meat – with the same issues applying to the dairy industry.

Over the weekend, we discussed different projects across Europe that are trying to change our relationship to animals, pioneering a more animal-centred food system. For example a farm in the Netherlands that applies the model of Community-Supported Agriculture (CSA) to cattle: In 1999, 120 local people bought “cow-shares”, either as gifts or interest-free loans, to enable the farmers to invest in a dairy herd and set up a micro-dairy. One cow-share was 100 euro and 10 shares bought one cow. The farm now has 35 dairy cows, as well as a herd of bulls that graze in a nearby nature reserve. The farm runs as a cooperative with 1800 members who order milk, yoghurt, cheese, meat and veg from the farmers on a weekly basis online. They can go to one of the five walk-in refrigerated containers in different towns in the area to collect their order with their own key. The members are also invited for members’ meetings where they can discuss animal welfare and other farm matters directly with the farmers. 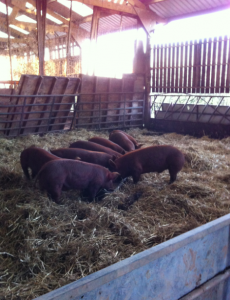 Another example we looked at is the “Spindle Pig”, a design collective based in Ghent, Belgium, who aim to increase self-organisation and collaboration among city dwellers, using food as a gathering point. In 2014, they put three pigs on a derelict piece of land in the middle of Ghent and involved 40 neighbours as “assistant farmers”, feeding and caring for the pigs. Collecting food waste from nearby grocery shops and other places, they redirected 100 kg of waste and produced 250 kg of pork. The project aroused quite a bit of controversy when the time came for the pigs to be slaughtered, as many neighbours had got rather attached to the animals… A similar situation occurred last December when Locavore held some Gloucester Old Spots in Glasgow’s Queen’s Park.

On Sunday, we had invited Nick Underdown, a former local journalist who currently works for Scottish Environment LINK as the Marine Policy and Engagement Officer, in personal capacity to help us see the parallels between land and sea when it comes to our food production. Widespread disconnection from, and often lack of local access to, a natural resource, devastating biodiversity loss, consolidated corporate influence on regulation, and ineffective governance, to name but a few of the common issues.

He also opened our eyes to the horrific absurdity of industrial-scale salmon farming in Scotland: Migratory fish put in cages, often fed with fish and crustacea harvested at the other side of the world, and the symptoms of perpetual stress and sea lice infestations treated with antibiotics and chemicals sprayed directly into the sea. To make matters worse, many of the farmed salmon specimens escape into the sea, affecting the genetic stock of wild salmon in ways which have yet to be researched and understood. Despite concerns of chemical residues in sea lochs, impacts on pure, wild salmon, and animal welfare, the Scottish government aims to further expand the farmed salmon industry by 2020.

Not surprisingly, public awareness and protest in some affected communities is rising. For example the Scottish Salmon Think-Thank, recently set up by people living on the North west coast, have successfully challenged applications for the leasing of planned salmon farms in sea lochs in the South of Skye and are proposing constructive alternatives. However, there is still a lot of work to be done in terms of research, awareness raising, and campaigning in order to transform Scotland’s fishing sector into one which is fair and sustainable.

On the Sunday afternoon when the storm had calmed down, we built a new indoor, winter area for Whitmuir’s pigs, and climbed the hill overlooking the farm. Then we gathered and asked: How could and should the food movement respond to this? 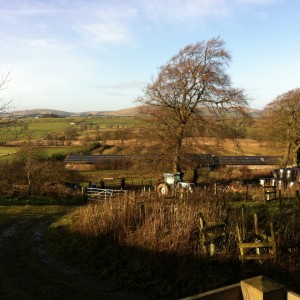 Over the weekend it had become clear to us that grassroots action and campaigning are very much needed to change how we fish, keep animals and eat animal products in Scotland. But where to start? Taking the lead from experiments in Ghent and Glasgow of bringing pigs to public spaces, we wondered what the effects would be of increasing visibility. Instead of “out of sight, out of mind”, would we value animal protein more if we were confronted with the death, and often life-long cruelty, that is currently part of our supply chains?

While education and public art can challenge our disassociation and disconnection from the animals we eat, we also felt it was necessary to focus on system-change rather than individual behavior change. We need to alter the rules of the game, so that environmental degradation, cruelty to animals and exploitation of industry workers are not permitted and normalised in the name of corporate profit.

Arguably, this change means going deeper than conventional campaigning. The current system is a reflection of a particular, dominant worldview that legitimises an exploitative relationship to animals and the land. How can we engender a sense of interdependence with non-human animals and the eco-systems we’re part of? What would our food system look like if we were to balance the interests of humans, animals and “the planet”? And could it be that these interests are not so different after all?

Spending a weekend on a stormy farm was not a bad place to start reflecting on these questions.

You can read more about the Nourish Food Leadership Programme here. Our next gathering is in the beginning of February, together with the Seed & Tree Festival organised by Common Good Food and Helping Britain Blossom.