Brexit and food: what does anyone know? 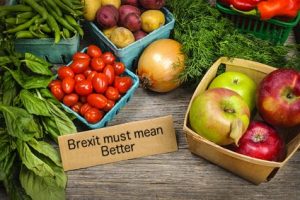 As we stumble through the most inept period in British politics since Suez, it is only human to look for opportunities to make the best of it.  While we wait for Theresa May to start lifting the veil of uncertainty (is she really committed to leading her cabinet, party, parliament and country through a prolonged period of self-harm? Does she really want to stand in the way of Scotland remaining in the EU?), we start to imagine what might be on the other side.

Many civil society organisations including Nourish have been calling for more food democracy, for a joined-up approach to food, health and farming and for a radical reform of the Common Agricultural Policy. So when the National Trust appears on TV to talk about public money for public goods [1] it’s hard not to feel encouraged.  Maybe we can, after all, do good food policy in one country even if we can’t do socialism.

The most reliable guide to the future is the past.  From the repeal of the Corn Laws [2] to the ‘great betrayal’ after World War I [3], family farming has been for the most part expendable in the UK, and cheap food the implicit goal of policy. In recent years, the UK government has on balance argued against progressive environmental measures within the EU, and the deregulators have more, rather than less, political capital in the new administration.

The EU put a floor under standards: sure, some of us wanted to go further, but the idea that it’s easier to build a progressive policy after you’ve destroyed the foundations is simply wishful thinking.

At UK level, what’s needed first is a strong coalition to defend the floor: no race to the bottom, no backward steps in environmental protection, no erosion of migrant worker employment rights.  Brexit must mean better.

It is different in Scotland.  We voted to stay: and we should continue to think and act as if we are staying.  It looks as if the Scottish Government is committed to keeping the floor: maintaining environmental regulations, treating migrant workers fairly, preserving the Agricultural Wages Board.  And the Scottish Government is committed to a new Good Food Nation bill, joining up the agenda across food, farming, health, social justice and the environment -the process is set to start in 2017.

It would be great if the space opened up by Brexit could create fairer food and farming policies across the whole UK.  For a year or two, the public will be interested.  So civil society needs to set out not just a tweak to the subsidy system or an ask on food labelling: but a new framework for legislation and governance, replacing the 1947 productivist UK Agriculture Act with a Sustainable Food Act.

In coming months Nourish will be campaigning for an ambitious and effective Good Food Nation bill.

Help us promote food justice in Scotland! You can support us with a one-off donation, by becoming a member, or by volunteering with us. More information here.