Game of Drones with Dave Goulson

In a packed room in Edinburgh on Wednesday morning the 1st of November, Nourish hosted a talk by highly-esteemed biologist Dave Goulson, University of Sussex. Dave gave an overview of the current impact of pesticides on the insect world and on bees in particular, and discussed what can be done to halt the damage and to restore our farmlands and gardens to ecological health. 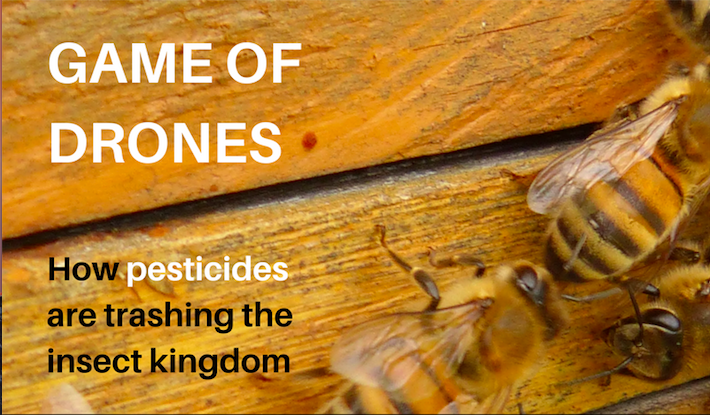 Dave told the audience that while 1/3 of the food that we eat is dependent on bees, they have been disappearing over the past decades along with other flying insects due to agricultural intensification and habitat loss. This was also highlighted in a recent publication of ground-breaking research showing that three-quarters of flying insects in nature reserves across Germany have vanished in the past 25 years.

The biggest threat to bees right now are neonicotinoids, a type of neurotoxic pesticides widely used as ‘seed dressing’ on rape (canola), cereals, maize, sunflower, and beet. “Neonics” are 7000 times more toxic than DDT: One teaspoon of the poison is enough to kill 1.25 billion bees, yet we apply more than 100.000 kilos in the UK every year, and this mind-boggling number is rising. Research has shown that farms can easily cut the use of neonics and other pesticides without incurring yield losses. Dave ended his talk with a poignant question: why do we do everything for our children and grandchildren except leaving them a liveable, living planet?

You can download his fact-packed slides here: Pesticide talk Edinburgh Oct 2017 and/or listen to an audio recording of his talk:

In 2013, the European Union set a moratorium on the use of neonics on flowering crops, despite a no-vote from the UK and several other countries. The European Commission now wants a total ban on their use outside of greenhouses, with a vote expected in December. The Environment secretary Michael Gove has announced the UK will support the ban this time around. The Scottish Government has so far not publicly commented on this. After his talk, Dave and Nourish director Pete Ritchie had a positive meeting with Environment secretary Roseanna Cunningham.

The Pesticide Action Network UK is currently running an e-action to encourage people to write to their MP telling them to put environmental protections, including restrictions on pesticide use, in the EU Withdrawal Bill.

The up-coming Good Food Nation Bill provides an opportunity in Scotland to tackle pesticide use and support agro-ecological farming.

Dave Goulson is a highly-respected biologist, author and defender of the bees, especially bumblebees. In 2006 he founded the Bumblebee Conservation Trust. He has published over 200 scientific articles on the ecology of bees and other insects, and is author of Bumblebees; their behaviour, ecology and conservation (2010, Oxford University Press) and A Sting in the Tale, a popular science book about bumblebees. His recent books include ‘A buzz in the meadow’ and ‘Beequest’.

He is one of the lead authors of the Worldwide Integrated Assessment on Systemic Pesticides (2014) which describes the “invisible, widespread, toxic haze on land, in water and in the air” caused by pesticide use.