Extinction ’17: What will halt mass extinction?

Last week, academics, NGOs, farmers and other humans converged on London’s prestigious Queen Elizabeth II conference centre. The attraction: an exploration of the disappearance of the natural world – and the creatures great and small that inhabit it. The extinction of species and loss of biodiversity is an environmental crisis perhaps on a level with climate change (if these things can be measured). However, it has generally not received the same attention, Compassion in World Farming (CiWF), partnering with WWF, decided to rectify this and put Extinction centre stage.

This was a timely intervention, and the conference saw many excellent presentations from renowned experts. The links were made loud and clear that the industrial livestock sector is a critical component of the current drive for deforestration, monocrops, and environmental destruction. Of course, the consequences are not only environmental, the suffering of animals and human health implications of industrial meat and dairy production were also widely noted. Katherine Richardson summed it up in one of the opening presentations ‘biological science and moral arguments are two different routes that arrive at the same conclusion. We should exploit the synergy and raise our voices together.’

As the conference continued, however, the potential to really build common cause and stimulate a movement that could work to end the industrial livestock sector was unfortunately not fulfilled. A social movement requires each and every one of us to not only understand the issues, but to know we are powerful agents for change.

The situation was depicted accurately, with numerous slides of planetary boundaries, with a beautiful presentation on bees and the scary impacts of pesticides (imidacloprid, a widely used neonicatonoid is 6,000 times more toxic than DDT), and with staggering statistics of the extent of deforestation (an area the size of Greater London every two months, in the Cerrado alone). The stage was set. We were left in no doubt about the severity and urgency of the challenge we face. 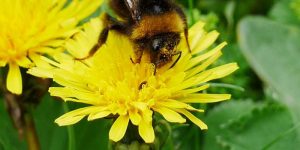 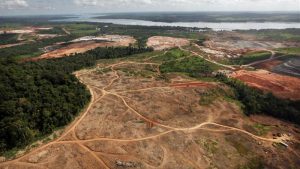 The diagnosis was also difficult to argue with: we need to end industrial livestock farming, tinkering at the edges will not suffice. We are the wrong side of four of the nine planetary boundaries because of our agricultural system. Globally, 8-18% of greenhouse gas emissions are a result of livestock, and 72% of deforestation is also attributable to the sector.

The solution presented: ‘eat more plants’. Eating more plants would benefit the health of each of our bodies, and less meat and dairy would result in an overall more sustainable pattern of food production too. Yes, definitely. We certainly do need to change our consumption patterns. There is no way around it, we cannot continue to consume the amount of meat, fish and dairy we do, without it continuing to have a disastrous impact on the planet.

However, at an international conference on such a critical issue, is that all we should come away with? It was mentioned by several speakers, that this is a systemic challenge, and will require systemic thinking to make progress. The difficulty with the simple message ‘eat more plants’ is that it approaches only one element of the issue. After a particularly self-congratulatory panel of businesses celebrating the success of getting more plant-based products on menus (after all ‘plants = profits’), somebody asked ‘but what about the pesticides?’ The message seemed to be one thing at a time. First we’ll eat more plants, however they are produced, and then perhaps we can talk about pesticides later. It was strikingly discordant with Dave Goulson’s earlier presentation on the urgency of addressing the collapse in bee populations.

It was not only the content of presentations – the emphasis on individuals and businesses as the core locus for progress – but also the entire format of the conference, which prohibited a sense of a developing social movement. Over the course of two days, the only breakout session was also overwhelmingly taken up with panel presentations. There were few opportunities to meaningfully participate, and so we left with little sense of the range of knowledge and diversity of ideas present among the 200+ attendees. This was particularly unfortunate because the panels were quite homogeneous, overwhelmingly composed of white men. 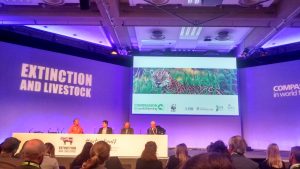 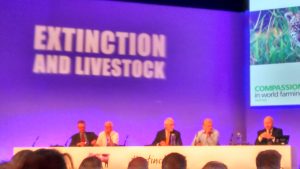 The format of the conference cemented common constructions of power, reducing the agency of participants to control over their plates and polite requests of those who hold the cards in the current system. It seemed completely disconnected from the progress of the global food movement over the last decade, which has persuasively articulated that change will come through empowering the powerless, that industrial livestock has something to do with patriarchy and racism, and only systemic thinking that challenges oppression in all its guises will bring the progress we desperately need – for ourselves, and for the natural world.

It was wonderful and refreshing to hear Raj Patel punctuate the overriding discourse with a powerful outline of how cheap meat relies on cheap labour and cheap care work. ‘Certain classes of people are considered disposable, and this issue cannot be separated out from the environmental concerns’. He also responded to the message of the conference with an emphatic ‘there is nothing so debilitating as reducing ourselves to the role of consumer’.

Tim Lang gave another breath of fresh air, issuing a poignant caution to Philip Lymbery (CEO of Compassion in World Farming), who was very excited about the beyond-meat burger, ‘do not get sucked into a techno-fix approach, we must work for systemic change.’

The extinction of species, biodiversity loss, and abuse of animals inherent in our current food system represent an ugly injustice. The idea that we must take a systemic approach to these issues does not mean diluting them with other issues, it means challenging all of the pillars that hold up the current situation. This is the only way we can make real progress. Without a doubt, a systemic approach to these issues is complicated, it is a far cry from the easily digestible message ‘eat more plants’. However, we have to get stuck in. Deconstructing the complicated, messy system and undermining the power structures that sustain the current injustice, requires all of us. It requires all of us to be active and empowered, sharing our knowledge, finding the intersection of our passions and struggles. Two days of panels dominated by older, white men in positions of power, will not catalyse this movement. That is why I left Extinction 17 slightly deflated. It’s 2017. The crises are upon us. We’ve got to do better.