The Common Agricultural Policy, also known as the CAP, has since its inception in the early 1960s been the largest common policy of the European Union, in terms of budget and of impact. It initially achieved its stated objectives very successfully: raising farmers’ incomes and ending hunger in Europe by increasing agricultural production. However, 50 years later, Europe has radically changed and faces new challenges: fast decline of biodiversity, poor nutrition and high rates of obesity, abandoned rural areas, structural unemployment, climate change… Yet, European decision-makers have failed to meaningfully adapt agricultural policies, making the CAP look like a vestige from another era.

Don’t get me wrong: the CAP has changed a lot in recent decades. Major reforms in 1992, 1999, 2003, 2008 and 2013 have transformed it, so that today’s CAP has little in common with 1962’s new-born CAP. The problem is that despite all these reforms, today’s CAP is still an expensive, inefficient and even damaging policy. 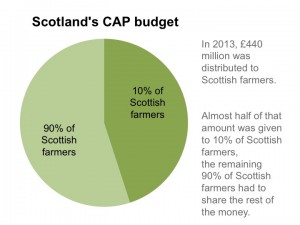 So how come Europeans (yes, I include Brits in this designation) do not care more? The CAP underwent a considerable reform process between 2010 and 2014. Yet, in those years there has been no broad public debate about what the long-term objectives, specific aims, and concrete measures of this policy should be. How is it possible that, us, European citizens, barely noticed while our national and European decision-makers debated how to spend our taxpayers’ and citizens’ money? How is it possible that in the 2009 and 2014 European elections, thus just before and after the reform, food and agriculture barely made it on the agenda of the electoral debates?

At Nourish these are questions we have asked ourselves. The answers are not simple, nor are the solutions. For the event Towards a Citizens’ Agricultural Policy, we have gathered an impressive and varied panel of experts with whom we will explore solutions to improve democratic participation in food and farming policies.

To help us better understand the intricate EU system, Alyn Smith, Faustine Bas-Defossez and Samuel Féret will share their experience from the last reform and insights into CAP policy processes in the EU.

Faustine was Agricultural Policy Officer at the European Environmental Bureau, EEB, when the last reform started. As the European environmental umbrella organisation, the EEB is a crucial player in agricultural matters. Faustine led the EEB’s advocacy campaign towards the EU institutions throughout the last CAP reform. She will share with us her first-hand experience about how civil society can influence European institutions.

Samuel is a CAP veteran. In the last reform, he played a crucial role as coordinator of the Agricultural and Rural Convention 2020, Arc2020. Building on the experience of previous reforms, Arc2020 strived to promote cooperation between civil society organisations and dialogue with European decision-makers, not only during the early stages of the reform, but throughout the whole process. By organising large public campaigns throughout 2012 and 2013, Arc2020 made a great contribution to improving public participation in the CAP policy process (for example, look up their Go M.A.D. campaign and Good Food Marches).

In addition to these EU and CAP experts, we have asked an expert of food system governance, Nora McKeon, to join us for these fascinating discussions. Nora has had a long career at the UN Food and Agriculture Organisation that culminated in her being in charge of the overall direction of FAO’s relations with civil society. She will be coming up to Edinburgh to share with us her extensive experience of strengthening civil society organisations and social movements’ participation in policy processes.

I hope by now you agree with us that this all sounds extremely interesting. Yet, these are only our international keynote speakers, there will be many more who will focus on the UK and the local levels. More about this soon, in the next blog post!

NB: There are still free spaces! If you would like to attend, get in touch with Célia at celia@nourishscotland.org.uk