“It is taste that will wake up this world.” – Live from Milan #4

Over the last few days, we’ve been hearing about why people farm: “You can live without so many things in this world, all this technology, but you cannot live without food. That’s why I farm”, Camara Mohamed from Mali.

We’ve also heard about the various struggles which are intimately related to the food system, issues of empowerment and oppression, autonomy and inequality.

Thus the food system is both inherent to our survival, and holds the key to tackling some of the big issues in our societies today.

For these reasons it seems imperative for the food movement to be as open and inclusive as possible – so what are the routes in?

Amidst all the messages relating to the environment, health, and social justice – the joy of food and eating risks being side-tracked. 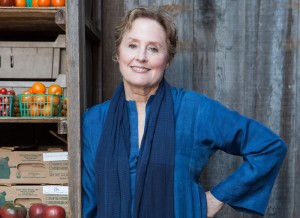 According to Alice Waters, “It is taste that will wake up this world.”

An American chef, activist, and educator in the food system, Alice Waters opened her talk at We Feed the Planet with some reminiscing of a year she spent in France at 19 years old. “I realised I had never tasted food before…it opened my mind to where food comes from.”

At the UK regional meeting at We Feed The Planet, we talked about the issues of the Slow Food model on the island – it might work in Italy, where a strong food culture already exists, where conversations about ingredients and recipes are common and lively among young people. However, (without wanting to generalise too much) in Britain that sort of chat is the provision of so-called ‘foodies’ – rather than everyone who eats.

According to one youth worker in the group: “the young people I work with just want to eat pop tarts, they don’t care in the slightest about food.”

Is it possible to (re)generate a food culture?

That has been Alice’s mission in the US – both through delicious food and public education. She founded the now famous Chez Panisse restaurant in 1971 in order to try and retrieve some of those ‘wow’ moments of eating that she experienced in France. This chef claims that 85% of cooking is in the farming.

The kitchen and dining room of Chez Panisse are connected totally to what is happening in the field. They cook in the seasons, use all of the vegetables available no matter what, and are at their most creative when this seems challenging.

Alice Waters, who has been extremely influential and thus not immune to criticism over the years, was asked how she won over her adversaries. “I bring them to the restaurant” she said, “a delicious meal can do a lot, but often the key is to finish with a really exquisite piece of fruit. A piece of fruit with nothing added, in all its glory, can change the path of the conversation.”

Presented with something extraordinarily delicious, we want to know why it is so good. We remember that food is really very special.

In some ways – with eating is such a regular occurrence – we have several opportunities every day to change our food culture.

Alice again – “when we eat fast food, we are also digesting the values of it. We are understanding that food should be fast, cheap, and available 24/7.”

Food should always be affordable, but never cheap. Many people in Scotland can’t afford to eat well because we have a low-wage economy, with benefit cuts and welfare reforms reducing incomes that were already inadequate. To respond with ‘cheaper food’(or charity-based approaches) is a solution that only causes infinitely more problems. Cheap food means devaluing farmers, producers, and our planet.

It’s time we started digesting some different values. This starts not only with what we eat – how it was farmed, or produced – but also how we eat.

To end – an open invitation: How about organising an Eat In near you? Share a meal with friends and strangers in a public space. Sit around a big table. Bring along your favourite dish. Chat about food. Spread the joy of a delicious meal consumed in the company of people, rather than screens.

(Get in touch if you want a hand! Connect with the budding Slow Food Youth Network Scotland on Facebook, Twitter or e-mail: sfynscotland@gmail.com)