From Hunger to Prison: The Poverty Penalty

Benefit sanctions leave the most vulnerable in society with no money whatsoever. In a battle between hunger and crime, many have stolen small amounts of food to feed themselves and their family. New compulsory court fines mean that people found guilty of stealing food who cannot pay the fines are sent to prison.

Why are we imprisoning hungry people?

It is frightening that whilst being one of the most financially prosperous places in the world, there are over a million people in the UK relying on charitable food banks. There are millions more who have no such access and are quietly, chronically hungry.

The combination of stagnant wages and welfare reform has left many people without enough money to eat. The politics of low wages and benefit conditionality is not an economic necessity in the UK. At the same time as Chancellor George Osborne announced a fractional increase to the minimum wage and a further £12bn cuts to welfare, he increased the threshold for the top rate of tax (meaning fewer wealthy people pay it), and decreased corporation tax (meaning businesses pay less). The reforms to social security are ideologically driven. 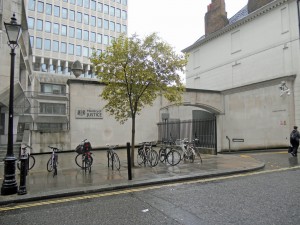 Earlier this year, former Justice Secretary Chris Grayling introduced compulsory court fines to England and Wales, non-payment of which results in imprisonment. There have since been a worrying number of reported cases of people under a benefit sanction being caught and charged with the theft of food, usually of a value below a couple of pounds, and this resulting in the imposition of hundreds of pounds worth of compulsory fines. The Department of Justice were unable to respond to our Freedom of Information request on how many people under a benefit sanction have been sentenced to prison for non-payment of these fines. However we do know that over 50 magistrates have resigned their positions in response to the harshness of these new rules.

Whilst the fines do not apply in Scotland, people here are equally impacted by stagnant wages and welfare reform. This is evident in the significant growth of food banks in Scotland – from just 1 in 2009 to over 50 today. We believe that in a nation whose food and drink industry is worth £14 billion, no one should fear that they might not be able to feed themselves. Nourish call on the Scottish Government to urgently adopt rights-based approaches to ensuring all people in Scotland have financial and geographical access to good quality, adequate, and culturally appropriate food. We also urge our neighbouring legal jurisdictions to reinstate judicial discretion for fines and to prioritise supporting people who are food insecure rather than further penalising them.