This has rung loud and clear throughout the last few days here at We Feed the Planet, with discussions on the commons, migration, and women.

Inequalities and systems of oppression are mapped on to – and maintained by – the structures of the global food system. Too much for a single blog post, but this one will focus on women.

What would an approach to agriculture look like if one of the goals is women’s empowerment?

A success story: Raj Patel spoke yesterday about a village in Malawi where, until 2000, 50% of children suffered from malnutrition. The village switched to agorecological farming, and in this way significantly increased their food production.

‘How can you have more food and still not reduce malnutrition?’ Raj Patel challenged the audience.

Various answers were shouted out: ‘the food goes to export’; ‘the population increases’; ‘its poorly distributed’; and many more indistinguishable noises.

None hit the mark though.

So the community reorganised themselves – they not only changed the way they worked the land, but who worked it. Men got involved in harvesting, as well as cooking and other household tasks: adequate breastfeeding resumed, child wellbeing went up and hunger went down.

In fifteen years, malnutrition – which used to afflict half of the children – has almost been eliminated from this village. And the change is spreading across Malawi. This story features in Generation Food, a new documentary on how to fix our broken food system, more on their website.

The theme of women – and the demands on their time – was later picked up in another workshop, discussing women in agriculture.

How can we empower women in the food system? Not through education!

This was one view that came up in the workshop. It isn’t to say that there is no role for exchanging ideas, sharing knowledge, and providing inspiration; however, for women across the world there is so much un-paid, un-recognised labour demanded of them, they simply do not have the time to learn – and implement – strategies by themselves. The provision of isolated opportunities or education initiatives may help some women, but unless they are coupled with mechanisms to deconstruct the patriarchal social structure, they will not be really effective or sustainable.

Patriarchy not only affects women’s involvement in the food system by the disproportionate requirements of household labour. Women have less access to productive forces and opportunities: to land, financial services, and education. And we live in a world where one in three women has experienced physical or sexual violence for being a woman.

Around the discussion table at Women in Agriculture, We Feed the Planet: 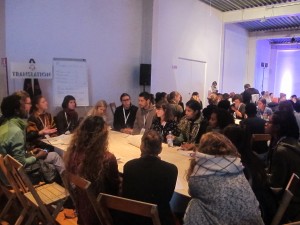 A woman from South Africa talked about the harrowing stories which began to come out towards the end of a three-day event for women in agriculture there. She spoke about the importance of holding a space, and the challenges when women shared these experiences and then went ‘back to reality’ in their villages.

A delegate from Ecuador spoke of how women in her country are migrating thick and fast to the cities. In some ways they are grabbing their freedom with two hands, she said. They might be escaping arranged marriages, abuse, or a life of toil they did not choose. However, this separation from their communities also involves a huge amount of loss – for themselves and wider societies.

It is important to create spaces for these women to land, one activist from California responded. These amazing, strong women have knowledge, skills and experience with food production and beyond it. If they are left isolated and unsupported having left their communities, this is likely to be lost.

Ultimately though, we are looking towards a solution where women can access land, take part in their cultural heritage with equal rights to men, and bring their knowledge and skills to create a different food system.

In the words of Via Campesina: “We are fighting for the sovereignty of the land, the territory and the body, saying no to violence in all its forms”.