When the UK joined the European Union (EU), policy powers for agricultural matters were transferred to the EU-level. This means that we joined the common market that existed for agricultural products as well as the Common Agricultural Policy (CAP), which sets rules for, and distributes subsidies to, farmers in all EU Member States. Agriculture is one of the only policy fields that are entirely devolved to the European level and is therefore the largest EU policy (40% of the EU budget is spent through the CAP).

The CAP was set up for very good reasons and was originally successful at fulfilling its objectives. After World War 2 Europe was hungry, agricultural productivity was low, and food prices were unstable. In 10 years, the CAP boosted food production and stabilised prices for farmers and consumers.

Today, Europe, the UK, and Scotland face very different challenges. Hunger has been replaced by obesity and wastage. Low productivity has been replaced by an intensive model of farming that pollutes our soils, water and air, contributes to greenhouse gas emissions, damages biodiversity, and makes us sick. Food prices are much lower for consumers, but in many cases too low at the farm gate and still unstable.

To understand better what the CAP really is and how this policy is developed, see these short briefings:

Nourish briefing: How is the CAP developed? The EU policy-making process 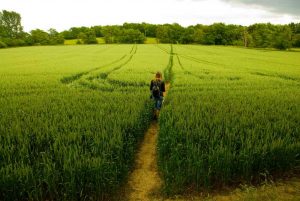 The Common Agricultural Policy underwent a lengthy reform process between 2010 and 2014. The most notable changes brought in by this reform are the so-called ‘greening’ of Pillar 1 as well as some ‘internal and external convergence’ – i.e. a reduction of the difference in payment levels within countries and across the EU. However, the final outcome of the reform was much weaker than the original proposals by the European Commission, and neither farmers nor campaigners are satisfied with the ‘new’ CAP.

Agriculture is under heavy pressure from various angles; from shrinking budgets, to climate change, to an aging farming population, to the increasing burden of diet-related health issues, it is clear that the current Agricultural Policy is not fit for purpose. Discussions are ongoing in different circles about the future of the CAP; whether we call it Common Food (and Farming) Policy, Common Integrated Rural Development Policy, or yet something else, the question is: will the CAP be radically reformed by 2020 to address the challenges agriculture and rural development face today?

In the second half of 2016 it seemed like a new CAP reform might be coming into speed.

In June,  the Dutch Government published a discussion document on the future of the CAP, suggesting broadening it to a Common Food and Agricultural Policy, ahead of a meeting with European Agricultural Ministers. The French Government also published proposals for a reformed CAP, with a strong focus on sustainability, resilience, and employment and innovation in agriculture. These proposals, however, we met with only limited appetite for change from most other EU countries.

In November, COMAGRI organised a workshop entitled ‘Reflections on the agricultural challenges post-2020 in the EU: preparing the next CAP reform’, ahead of which research was commissioned and published about the options for the future of direct payments, market measures, and rural development (see here).

Finally, in December, the Commission, who had so far shown little interest in a new CAP reform, seemed to change course. The President of the European Commission, Mr. Juncker, announced that the European Commission will publish before the end of 2017 a Communication on the future of the CAP post-2020, following a consultation in early 2017. It is unclear, however, if this Communication will be the start of a fundamental rethink about Food and Farming Policy, or if it will only announce minor changes to ‘simplify and modernise’ the CAP within its current structure.

See the Press Release from the European Commission here

After Brexit, should we care?

Nourish’s view is “More Europe, better food”. We agree with the Scottish Government that Scotland should stay in the European Economic Area (like Norway), if not in the EU. This leaves the question of whether we will remain within the Common Agricultural Policy open to negotiation. We believe it is therefore important for civil society in Scotland to stay involved in CAP reform debates, while also engaging in important discussions about the future of Scottish agriculture.

More resources on the CAP

farmsubsidy.org, a database of CAP recipients by Jack Thurston