The wind and the willows 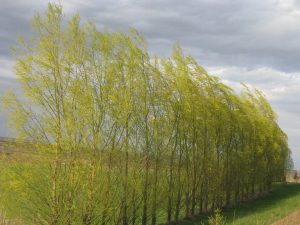 It was disappointing if predictable that much of the media coverage for the UKCCC’s net zero report last week focused on lifestyle changes – did this mean going back to the Stone Age, never flying and living in the dark to save the planet? – rather than on the main message of the report.

Because this isn’t a sackcloth and ashes report. The core argument is that tech will do most of the heavy lifting. Progress with renewable energy, especially the remarkable drop in offshore wind costs, makes the more ambitious net zero target affordable. Residual emissions will be mopped up with more tree-planting, and the carbon from swathes of willow and other biomass crops will be captured and stored.

According to the report we can get nearly all the way to net zero with minimal change in lifestyle. A 20% drop in red meat and dairy consumption over the next thirty years is almost imperceptible. We can fly a bit more than we do now and still stay inside the envelope. And while we are being asked to heat our homes with heat pumps and drive electric cars, this is more gain than pain.

So what’s the role of citizens here? Now the Scottish Government’s signed up to net zero by 2045 can we just buy into this gradual greening and get on with the rest of our lives?

Bad idea. We’ve got work to do. First, we need to maintain a sense of urgency. It’s particularly welcome that Scottish Government’s scrapped plans to reduce the airport departure tax, and has proposed a new climate plan within six months. We need a quarterly progress report from government and business to keep up the momentum.

Second, we need to get involved in the how, not just as consumers switching to greener products but as citizens shaping a just transition. Getting to net zero has to mean a fairer as well as a greener Scotland. Where is the climate change dividend for people who don’t have a car or own a house, who already tread more lightly?

The Scottish Government requirements on private landlords to upgrade their houses are welcome, and could be accelerated. But it’s time to implement the old idea of fairer tariffs which scrap standing charges and provide the first few units free while charging much more per unit for high users. Public ownership of energy should be part of the change.

Time to plan for mobility as a service to which everyone has fair access, with excellent affordable public transport and the driverless car network in public ownership. Time to look at clothing, food and appliances so that making sustainable choices is easier for all and creates new good jobs.

A just transition matters for farmers and rural communities too. If we followed the UKCCC advice on land use change we’d see around 30% less grassland, a sharp decline in ruminant livestock numbers and up to 27,000 km2 of new woodland and bio-energy crops in the UK. That’s a third of the area of Scotland. How will the benefits from this new bio-economy be shared, so this doesn’t simply become a new version of the clearances?

Third, we need to connect internationally. It’s good to have a sense of renewed momentum in Scotland. But this is a global issue: and the EU has a pivotal role not just in raising ambition but in creating the financial and governance mechanisms to respond to this global emergency. Scotland and the UK staying in the EU gives us much more leverage on the agenda. While the Brexit party  is led by a climate change sceptic, the forthcoming European election is a chance to vote for one of the parties which takes climate change seriously.

And finally: reducing our food waste, getting out of our cars, staying on the ground rather than flying, eating less and better meat, buying seasonal and local, making things last: these prosaic acts of everyday stewardship won’t be enough on their own. But if we want government and businesses to care enough to make changes, we also have to do our bit.

As it says in the book “The Mole had been working very hard all the morning, spring-cleaning his little home” while “Toad talked big about all he was going to do in the days to come”.