With the local elections happening tomorrow, Nourish is asking candidates to support our ideas for how Local Authorities can catalyse some vital changes in our food system. Full details of the #NourishElectionAsks and how to sign up as a supporter are available here.

Nourish is currently campaigning at a national level for a new legal framework for the food system in Scotland. However, alongside a better framework underpinning our food system, we need local action to bring about a real transformation of how we do food. Part of this is thinking differently about our public spaces.

Today we’re rounding up our series of blogs with our last policy ask:

We want to see Local Authorities ban the spraying of glyphosate and other pesticides on all public access land by 2018. Glyphosate was classified as “probably carcinogenic to humans” by the WHO and affects urban biodiversity. Several European countries, including France, Holland, Denmark and Sweden, have already banned or restricted the use of glyphosate and other pesticides by Local Authorities. Cornwall Council also recently put forward a motion to ban glyphosate both on public access land it owns or manages, and reduce its use on its County Farms. Instead of focusing on weed control, we can use sections of our parks and verges to grow vegetables, fruit and herbs for and with local communities.

In 2011, the Stirling Council piloted the Edible Borders project, as part a two- year partnership between Going Carbon Neutral Stirling (a programme of Keep Scotland Beautiful) and Stirling Council. The project seeks to encourage citizens and communities to grow some of their own food and reduce their carbon footprint. As part of this, the Council’s Land Services team transformed seven sites across Stirling, including one in front of the council building, and planted a mixture of vegetables and herbs instead of traditional garden bedding plants. All of the produce from these beds was donated to the Salvation Army. Costs of the Edible Borders were not higher than what was previously grown, and the project employed three apprentices as part of the Modern Apprentices scheme. The project received local and national acclaim and has since been expanded into other areas, working together with local communities. 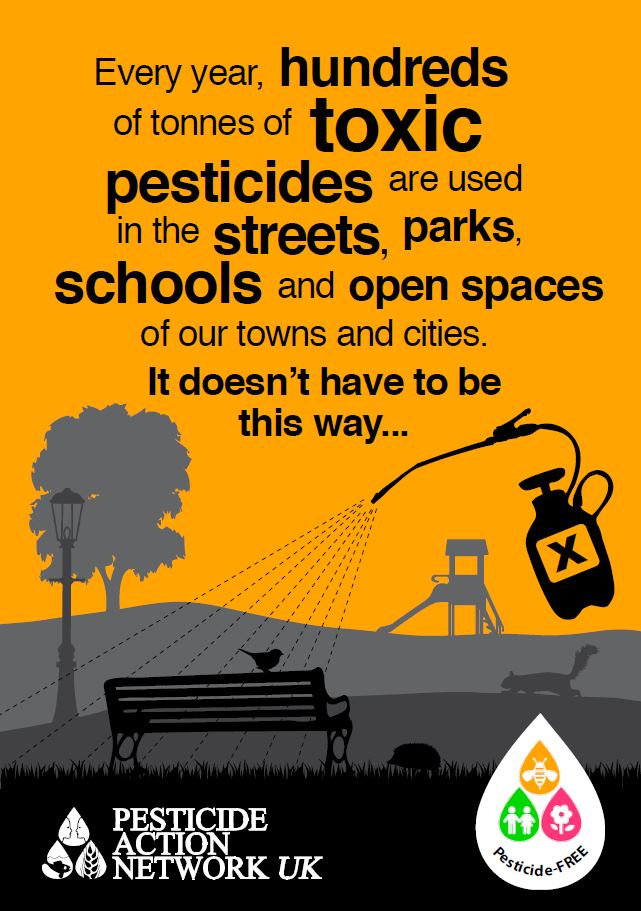 The Pesticide Action Network UK (PAN UK) has been running a Pesticide-Free Towns campaign since July 2015 and they’ve had some success with councils turning away from the use of pesticides. PAN UK is organising a free workshop on Pesticide-free towns from 12.30 – 15.30 on Saturday, 3rd June, at Burgh Halls, Linlithgow.

The day will focus on why we need to stop the use of all pesticides (including glyphosate) on streets, parks, playgrounds and other public areas, what the benefits are and how to organise a successful campaign in your local area.

PAN UK has developed some great resources too, such as a campaign guide and campaign posters, a sample letter to write to your local Councillors and  ‘Go Pesticide Free – A toolkit for Local Authorities‘.