With the local elections right around the corner, Nourish is asking candidates to support our ideas for how Local Authorities can catalyse some vital changes in our food system. Full details of the #NourishElectionAsks and how to sign up as a supporter are available here.

From now, until the elections, we’ll be posting blogs about each of our asks.

Nourish is currently campaigning at a national level for a new legal framework for the food system in Scotland, which would include the human right to food in Scotland. This would place duties on local, as well as national, authorities to ensure its realisation.

Local Authorities across Scotland should work to ensure that everybody in their constituency has both financial and geographical access to enough nutritious food.

The environmental drivers of poor diets, including the advertising and promotion of food high in fat, sugar and salt and the concentration of unhealthy food outlets, are rarely challenged and the results are saddening:

This means getting serious about tackling supply chains and our retail environment. We want Local Authorities to support local producers of healthy food, build stronger urban–rural links and help to make eating fruit and veg easy and affordable. We propose the following measures as a starting point:

In Birmingham, the Council has taken steps to reconfigure the food environment after it mapped takeaways near schools across the city and found that nearly three quarters of schools had a hot food takeaway within 400 meters.  A policy forbidding planning permissions for fast food outlets near schools and forbidding more than 10% of units in any shopping district to be takeaways, has led to 15 out of the 36 applications for hot food takeaways being refused since the policy was introduced in 2012. The policy is now part of Birmingham’s Childhood Obesity Strategy developed by Birmingham’s Health and Wellbeing Board in 2013 – which includes a Food Charter. 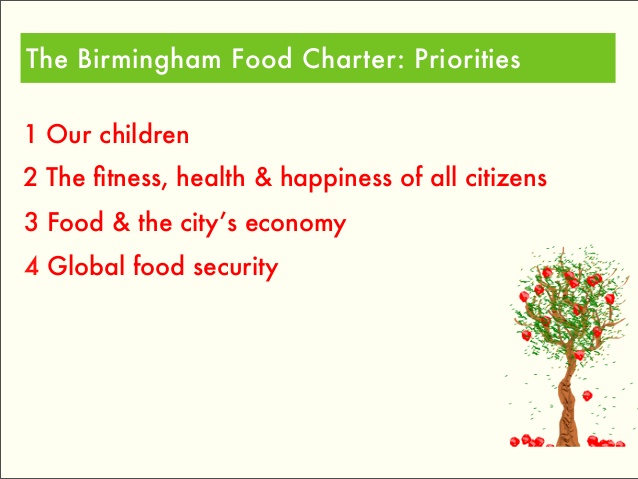