Guest blog: Beekeeping for beginners for a pollinator-friendly Scotland

Why bees are so important for our food system

The Scottish government recently launched the Pollinator Strategy for Scotland (2017-2027), outlining measures to make the country a friendlier place for declining bee populations. Bees are essential for pollinating roughly one third of the world’s food supply, maintaining biodiversity, and pollinating local food that keeps us healthy and well-fed. In Scotland, we rely on bees for strawberries, raspberries, currants, apples, peas, and beans, all of which also contribute to a thriving economy. If we lose bees, not only will there be a negative impact on Scotland’s agriculture and food security, but the economy and our health will also take a hit. 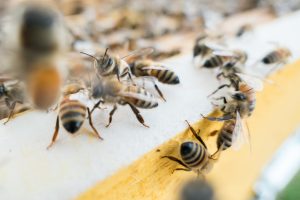 Photo by Massimiliano Latella on Unsplash

Bees pollinate crops that contribute at least £43 million to Scotland’s economy each year. Over the last fifty years, however, there’s been a 60% decrease in our numbers of bumblebees, honeybees, and wild bees. In particular, we rely on honey bees for 70% of crops in the UK. But research has found honey bees are only managing to supply 34% of our pollination needs. Other wild pollinators, such as bumblebees and hoverflies are beginning to take over some of the work. Nevertheless, if bees disappeared altogether, farmers would have to pollinate their trees and crops manually — an extremely laborious and expensive task estimated to cost £1.8 billion annually.

There are numerous causes of bee decline throughout Scotland, including pesticides, climate change, and pollution. Additionally, Scotland has lost 97% of wildflower meadows since World War 2, leaving bees largely without a natural habitat. Bees use wildflower meadows for both foraging and nesting. Moreover, changes in land use, driven by farming and urbanisation, have resulted in loss of floral diversity meaning bees no longer have access to a healthy diet.

If you want to continue enjoying Scotland’s delicious local produce, it’s important to take action to protect pollinators. In particular, beekeeping is an important sustainable practice which ensures local crops get pollinated and results in high-quality produce and higher yields. To get started, you need equipment including a beehive, bee smoker, protective suit and hat, and, of course, your starter colony. You’ll also have to do some initial learning so you know how to care for your bees, but eventually, your bees will thrive with minimal intervention.

Finally, even just planting bee-friendly flowers like foxgloves, alliums, and borage can help. Never use chemical pesticides as they’re potentially fatal to whole colonies. Doing your bit to secure a future for Scotland’s pollinators will, in turn, protect biodiversity, food, and human health.