2016 Global Nutrition Report: Nourish’s take on what the Scottish Government could do

The Global Nutrition Report ‘From Promise to Impact, Ending malnutrition by 2030’ 2016 was released today. The report is the only independent and comprehensive annual review of the state of the world’s nutrition.  You can find it on Twitter as @GNReport or #NutritionReport. 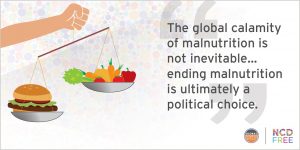 An immense and urgent challenge

The headline  of the report? One-third of the world population is malnourished. Malnutrition manifests itself in very different ways, from poor child growth and development to adult overweight to deficiency in important minerals and vitamins leading to disease. The report calls for recognition that these various manifestations of malnutrition are occurring simultaneously in nearly half of all countries, the UK included, and that political action is required to respond to this unique situation.

An increasing global challenge is the ongoing rise in obesity and overweight in almost every country. The UK r 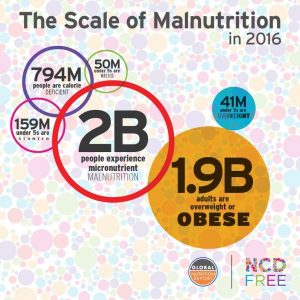 anks 30th out of 190 countries in adult overweight and obesity prevalence with 63.4% being overweight or obese.

The report does not beat about the bush when it states: “Malnutrition and diet are by far the biggest risk factors for the global burden of disease”.

Taking a joined up approach

The report recognises that improving nutrition is not about telling people to eat five-a-day: “The food, social, health and living environments in which people make decisions have a huge influence on nutritional status (…) For example the food environment should make healthy diets available, affordable, accessible, and desirable. The social environment should set norms about good nutrition and hygiene and support people in caring for their nutrition and the nutrition of their families.”

In other words, to create meaningful, structural change governments need to take a joined up approach to improving nutrition. At Nourish we’d like to see the Scottish Government meaningfully apply the Individual-Social-Material (ISM) framework to food and public health, as it does in other policy areas. This framework recognises the influence of both the physical and social environment on people’s food choices. We support the recommendations in the Global Nutrition Report that a governments need to be committing more resources to obtain baseline data about malnutrition. The report calls for a data revolution for nutrition. The scarcity of data prevents us from identifying and learning from real progress at the global and national levels. It also hides inequalities within countries, making it more difficult for governments to know about them and for others to hold governments fully accountable.  We call on the Scottish government to release funding to research and quantify the real levels, causes and impact of malnutrition in Scotland, to continue to re-measure on an annual basis, and to set SMART targets, in line with the Sustainable Development Goals, to meet the target to end malnutrition by 2030.

Most of all, we need real political will and government departments working together. The report suggests that “by the end of 2018, all national governments should build interministerial task forces to implement nutrition policies, as well as national advisory councils or commissions”.

There is strong synergy here with Nourish Scotland’s and the Scottish Food Coalition’s campaign for a Food, Farming and Health Act, which would amongst other things create a statutory Food Commission and could include a coordinated Nutrition Plan.