This is the second of our weekly blogs about each of our four key asks for the Bill. The Scottish Government is consulting on the new Climate Change Bill until the 22nd September. You have until then to take part in the e-action run by Stop Climate Chaos Scotland to ask the First Minister to make Scotland a leader in climate change mitigation and include a stronger focus on food and farming in the Bill. 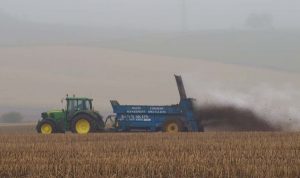 One of our key asks for the Climate Bill is for the Scottish Government to develop a Nitrogen Budget by 2020. Nitrous oxide (N2O) – a nitrogen-based greenhouse gas – accounted for 7.7% of Scotland’s net greenhouse gas emissions in 2015[i]. These emissions are mostly related to fertiliser use and could be drastically cut with highly cost-efficient measures informed by a Nitrogen (N) Budget.

Scotland’s Nitrogen Budget should create a clear picture of all key flows of nitrogen and indicate where major losses and inefficiencies occur, thereby enabling the Government to adopt a set of specific and targeted measures to use nitrogen more efficiently and reduce losses of nitrogen in all its forms, including N2O emissions. The budget can be used as a tool to develop dated targets to improve nitrogen use efficiency in Scotland. Read on as we explain the nitrogen issue and jargon. If you prefer to skip the details and want to focus on our proposed solution, a N budget, click here. 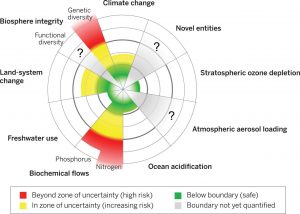 The 9 planetary boundaries illustrate the scale of the most pressing environmental concerns. They show how far we have pushed the limits of what our planet can endure without catastrophic breakdowns. Our food system is a key driver of many of these environmental impacts, and must urgently become a central part of the solution.

Improving our understanding and management of the flows of nitrogen (N) and other nutrients such as phosphorus (P) is a key starting-point.

Crops need nutrients to grow. Although N makes up most of our atmosphere, most plants (apart from N-fixing legumes) are not able to capture it, and although phosphorus is stored in soils, plants can only use if the right micro-organisms are present in the soil to process it for them.

Traditionally, humans have supplied N and P to their crops by incorporating legumes into crop rotations and recycling the nutrients available in animal manures and other organic materials. Legumes are able to utilise the unreactive nitrogen (N2) in the air through biological N fixation. Symbiotic organisations capture N2 from the air and convert it to its reactive form, Nr, making it available for plant growth.

In the last century, we started to manufacture N fertiliser through the Haber-Bosch process and to convert mined phosphate rock into a soluble form which is immediately available to plants. -. This led the way for the so-called green revolution, with phenomenal yield increases and… proportionally phenomenal pollution.

Conventional agriculture is responsible for the lion’s share of the explosion of N and P flows. Manufactured fertilisers bring new N and P into the system in great quantities. Crops cannot absorb endless quantities of N and P, so excess nutrients applied to fields lead to soil, air and water pollution which is detrimental to ecosystems, climate change and human health. In addition, intensive livestock farming concentrates huge quantities of nutrients as animal manures in often relatively small “hotspot” areas. A picture is worth a thousand words, so have a close look at the diagram below. 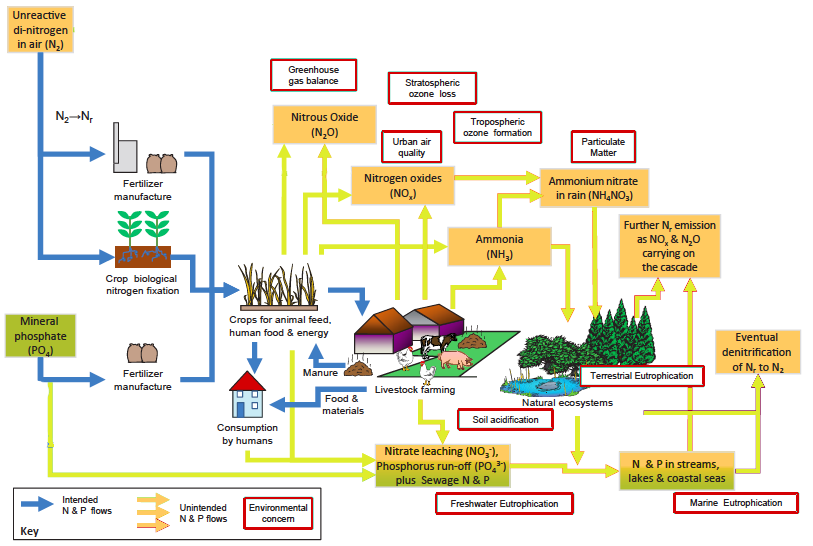 The blue arrows in the flow diagram indicate the intentional movement of nutrients: farmers apply fertilisers to their fields and certain crops fix nitrogen, the harvest brings some nutrients direct to our plates and others – the vast majority: 80%![ii] – become feed for livestock to produce meat, dairy products and eggs, with a large proportion of N ending up in manure. Manure is applied to fields and the cycle starts again. However, this cycle of nutrients is only a small part of the picture. At every stage of the food production process and beyond, N and P are lost and leak out to the wider environment, through emissions to the atmosphere and run-off and leaching into watercourses and groundwater. The yellow arrows represent those losses and here are a few notable facts and statistics:

Other flows of N and P are relatively minor compared with agricultural activities. 90% of mined phosphorus is used to manufacture fertilisers, and 80% of human Nr production (transformation of N2 into Nr, excluding crop biological fixation) is for agricultural purposes.

Food waste is not represented in the diagram, yet it generates pollution at many stages. At a most basic level, a large amount of nutrient pollution is caused for nothing. Further, if wastage is not tackled, we need to produce even more food as the global population grows, which can only be done by further intensifying agriculture and/or by expanding the surface of land that’s farmed, thereby exacerbating N and P pollution. Finally, food waste that is not properly recycled results in valuable nutrients being lost as they are buried in landfill (mined phosphate is a finite resource with uncertain long-term stocks), with continued pollution as they leak out as ammonia (NH3), nitrate or methane (CH4).

It may seem counter-intuitive that nutrients, the source of life, can actually cause considerable harm. However, excess may do harm: too many nutrients upset the delicate balance of ecosystems.

Excess phosphorus and nitrogen in water cause eutrophication: plants and algae grow excessively due to the nutrient-rich environment, which can result in dead zones and fish kills. Increased flows of Nr mean that more N compounds are deposited from the air onto plants and soils leading to terrestrial eutrophication. Some plant species (nettles, tall grass and reeds, for example) will benefit from the increased supply of nutrients and will thrive, crowding other more sensitive species out. This loss of plant biodiversity will negatively impact species higher in the food chain as the primary feed of some animals disappears, crowding them out too and creating a domino effect. Since N compounds move freely in the atmosphere and can fall anywhere with the rain, even on protected areas, eutrophication threatens species of high conservation and food value which are naturally adapted to few nutrients, even far from pollution hotspots.

Human health is mostly endangered by air pollution, but poor drinking water quality due to N and P pollution can also be an issue. Ammonia (NH3) emitted from agricultural activity plays a leading role in the formation of airborne fine particulate matter which has been linked with significant increases in cardiovascular disease-related mortality. In addition, nitrous oxide (N2O) is the main cause of stratospheric ozone depletion, increasing the risk of skin cancer. Other forms of N (NOx and NO2) are also major air pollutants and threats to human health, but as they are emitted by burning fossil fuels in industry and transport rather than by agricultural activity, we do not discuss them here.

Last but not least, nitrogen is a contributor to climate change at two levels: first in the manufacture of N fertiliser, an energy-intensive process that currently relies on fossil fuels, second through the emissions of nitrous oxide (N2O) during fertiliser application and in longer-term emissions from soils and nutrients-saturated watercourses. Climate change is already starting to harm ecosystems and human health as we experience more extreme weather events, temperatures become more extreme in some regions, and a plethora of other environmental impacts threaten making life on Earth more precarious.

Towards a solution: A Nitrogen Budget

Despite this phenomenal pollution problem, current regulation sets a rather low baseline rather than promoting best practice. Five small Nitrate-Vulnerable-Zones are the only areas in Scotland where nitrogen use is under closer scrutiny, but even there, the rules only seek to prevent water pollution, leaving the issues related to air quality and climate change unaddressed.

Nitrogen pollution affects all aspects of our environment – air, water, soils, and ecosystems – and damages human health. The good news is that this pollution is far from unavoidable. While human activity will always interact with nitrogen flows, we could drastically cut pollution by using those valuable nutrients more smartly. The key is to build a better understanding of how nitrogen flows in, through, and out of our food system, and what the contribution of energy and transport is. The crucial concept we need to focus on is Nitrogen Use Efficiency (NUE).

At crop or field level, NUE is the ratio between the amount of N removed with the harvest and the amount of N available to crops. Low percentages mean large excesses of nitrogen were applied to fields, while above 100% it indicates soil nutrients depletion. Average crop NUE in the UK in 2008 was 29%[v]. In the same year, most European and North-American countries had higher crop NUE, up to 68% in Austria. The target for crop NUE recommended by the Centre for Ecology and Hydrology is 70%. If Scottish farmers were able to achieve a high field-level NUE, they would save money by reducing inputs of expensive fertilisers and spreading costs, while drastically cutting emissions of N2O and NH3 and N and P leaching into our water.

The CEH also recommends a target of 50% national full (food) chain NUE. National full-chain NUE expresses the quantity of N in food available for consumption compared to the total nitrogen inputs, accounting on both sides for imports and exports of fertilisers, livestock feed, and agricultural products. Full-chain NUE in the UK in 2008 was 24%, meaning that 76% of the nitrogen entering our food system ends up lost to the environment.

Scotland needs a Nitrogen Budget that creates a clear picture of, and seeks to improve, our national full-system NUE. That means including non-food sources of nitrogen pollution (energy and transport), and accounting for food waste. It is not impossible: Denmark has done it.

Danish scientists developed a national nitrogen budget for Denmark for the years 1990 to 2010. The Danish N budget is represented in the diagram below, showing inputs and outputs of nitrogen at national level and the internal flows of nitrogen between the relevant sectors. 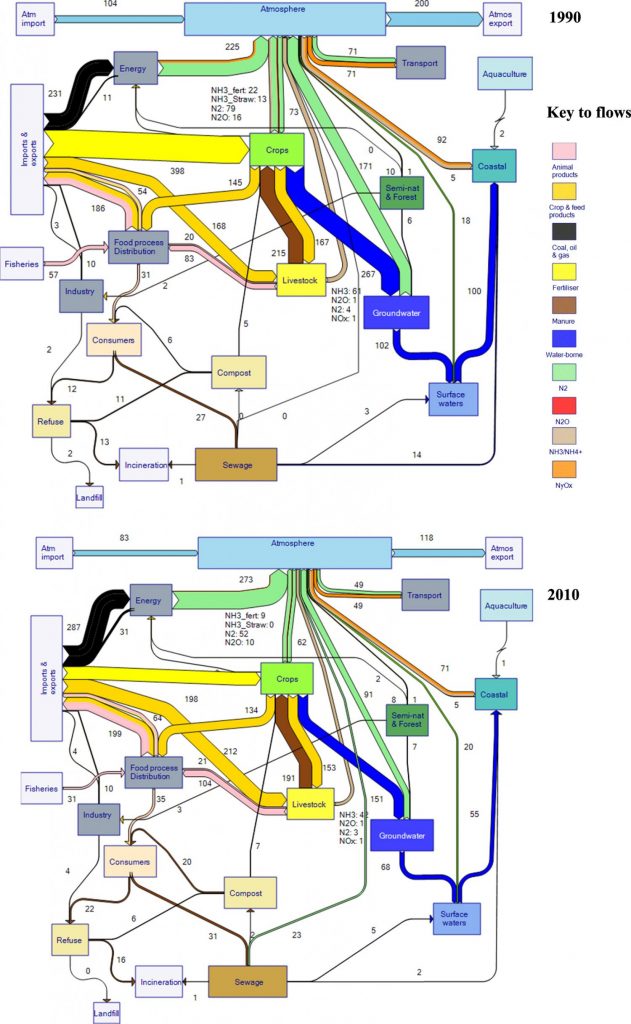 The success of Danish NUE policies can be seen with just a quick look: most arrows shrunk between 1990 and 2010 (except in energy production), meaning that food-related flows of nitrogen have been reduced and nitrogen use efficiency increased. This has had significant benefits for the environment; without a corresponding fall in production, leaching of nitrogen to the aquatic environment has been halved, and emissions of nitrous oxide and ammonia have been reduced by a third.

Scotland needs to create a similar picture of our nitrogen flows. That picture should then be used as a basis for setting targets and regulations that will improve our NUE and reduce nitrogen pollution.

Examples of such regulations include:

This will benefit our environment, our health, and our wallets. Nitrogen pollution comes at a huge societal cost. The European Nitrogen Assessment estimates those costs to be €70–€320 billion per year for all European Union member states. 60% of that cost is related to adverse effects on human health. The total damage cost equates to €150–€750 per person, or 1–4% of the average European income.  And of course farmers will benefit too, by making better use of expensive nutrients.

[ii] “80% of the Nr harvest in European crops provides feeds to support livestock (8.7 Tg per year plus 3.1 Tg per year in imported feeds, giving a total of 11.8 Tg per year). By comparison, human consumption of Nr is much smaller, amounting to only 2 Tg per year in crops and 2.3 Tg per year in animal products.” Mark A. Sutton and Hans van Grinsven (2011) European Nitrogen Assessment. http://www.nine-esf.org/node/204/ENA.html

[v] Mark Sutton et al. (2013) Our Nutrient World: The challenge to produce more food and energy with less pollution, Centre for Ecology & Hydrology, Edinburgh on behalf of the Global Partnership on Nutrient Management and the International Nitrogen Initiative http://initrogen.org/sites/default/files/documents/files/ONW.pdf