Will another Kitchen Table Talk change the world?

Nourish Scotland, along with other members of the Scottish Food Coalition, have been running a campaign to get people to talk about food over the last couple of months. Whether that’s at big old wooden kitchen tables, smooth and sleek office tables, tables at the allotment or in community centres or pubs or cafes or at no table at all, people across Scotland have been gathering to discuss food.

‘Hmm..’ says the cynic, ‘..we are at crisis point though, families are relying on food banks, insects are being poisoned, the food we eat is making us ill, people are working in slave conditions to produce food, what is the use of a few more conversations about it?’. The cynic makes a valid point – looking at the scale and urgency of these challenges, it is tempting to whir frantically into some sort of action that seems to concretely address the problems. The difficulty is, though, our food system is wired in a way that makes injustice inevitable, nothing short of a revolution in which we rewire the whole system is required if we really want to ensure everyone can eat well without messing up the planet.

In her excellent book, Hope in the Dark, Rebecca Solnit likens revolutions to mushrooms. They seem to appear spontaneously, arriving on the surface of the earth as if from nowhere. However, mushroom fans will be aware that they are actually just the fruiting body of a much larger fungus – mushrooms appear because of underground networks of mycelium, which explore outwards and gather the nutrients.

Hosting a Kitchen Table Talk might seem utterly isolated from the levers of power that can actually stop food poverty or ban poisonous pesticides. They are not putting the pressure on, getting up in the face of elected decision makers or corporate power. However, it’s a very big mushroom we’re trying to create here: each and every conversation forms an integral part of the mycelium we need to make a food revolution possible.

Kitchen Table Talks are transforming assumptions about who and what matters, who should be heard, and who has rights. Already, over 500 people have taken part across Scotland, who have powerful ideas about food, who are not prepared to stand by and let the pursuit of profit drive our food system, who have insights into how we begin to reprogramme it for justice. Each conversation might seem peripheral, but as ideas are exchanged and developed at kitchen tables (or other weird and wonderful venues!), different outcomes emerge from those places where ‘the power’ lies.

Once we recognise food as a fundamental human right in Scots law (for example), and the cogs of the system start turning differently as a result, it will seem so obvious and normal that not many people will imagine all of the invisible actions that were needed to enable the idea to fruit. Right now though, we are mycelium: doing the (under)groundwork without which no changes will suddenly pop up.

You can host a Kitchen Table Talk and feed in your ideas to us until Sunday 22nd April, as well as get involved in our new monthly meet ups for Good Food Nation Campaigners (next meeting 12th April!). We are slowly changing, the network is spreading, the connections are juicy, and together we will burst through. 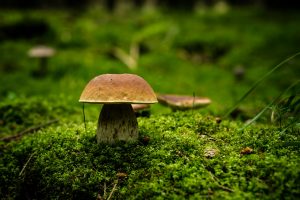