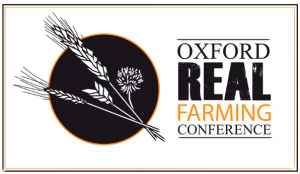 What an outstanding achievement!  From 80 people meeting up ten years ago to say ‘there is another way to do farming’ to a 1000 strong conference with 100 workshops and 250 speakers, including not just Michael Gove but this year the legendary Eliot Coleman.

Colin Tudge and Ruth West have shepherded the event throughout, and preserved its core values – keeping it affordable and accessible, informal but informed, opinionated but with room for many opinions, and both organised (thanks in part to an amazing group of volunteer stewards) and organic.  Over the years the event has become increasingly international, inclusive and diverse.

What’s changed since 2010, in the conference conversation and the world outside?

The core conversation has endured.  It’s about farming as a craft, a profession, a praxis, an expression of care and a service – not just a business.  It’s a curious enquiry into the natural world on our farms, how to explore, respect, learn from and work with that world we too often overlook. It’s about land, power and politics, and challenging the idea that there is no alternative to a dehumanised, homogenised and unaccountable food system.

Many new voices have joined the conversation.  The Pasture Fed Livestock Association, Eating Better, the Sustainable Food Trust and Nourish Scotland are just some of the new organisations which have emerged since 2010 – along with the Landworkers Alliance, which increasingly has become the momentum behind the conference and has articulated so much of the core agenda through the People’s Food Policy.  But it’s not just more activists – the range of farming voices is much wider too, as ‘unconventional’ approaches such as agroforestry, mob grazing and positive animal welfare have proved their worth and spread.

The conversation has evolved, too.  More than half of the speakers this year were women, and one workshop explored the links between farming, food and feminism.  The food was mostly vegetarian and vegan, and although the three perspectives of no livestock, less and better meat, and ‘ruminants rock’ continue to co-exist more amicably in the conference than outside, the debate is a little louder.  We talked about plastics: and there were no single use coffee cups to be had.

In the outside world?  The first conference was five years before Paris, and farming is now much higher up the climate change agenda.  Soil carbon has moved from margin to mainstream.

Despite our efforts, there’s not yet been a renaissance of ‘real farming’.  It’s still hard to get access to land – and it’s still hard especially for a newbie to make a good living from a small farm.   Despite a range of new sales platforms and new ventures, short supply chains are still a marginal part of the UK food economy.  Just Eat is listed on the footsie. There’s still 20% land in organic management than in 2010.

But it’s not all bad.  While farmers on average are getting older and farms are getting slightly bigger, there’s been only a slow decline in the number of holdings in the UK – and interestingly, 60% of the 100,000 holdings under 20 hectares are in the devolved nations.  The CAP has probably helped to slow down consolidation: which brings us to Brexit. 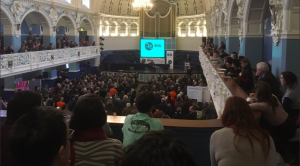 The conference has now had two visits from Michael Gove.  This time, there was perhaps more scepticism about the gap between the rhetoric of public money for public goods and the lack of bankable commitments and accountability either on money or policy.  But there has been movement from DEFRA – first on neonics and more recently on metaldehyde – which suggests a genuine revaluing of the environment.  Though for some of us, the prospect of re-engaging with the CAP would be a small price to pay for calling the whole thing off.

Perhaps the most profound sign of the times was not what happened at the Real Farming Conference this year, but what happened at its now smaller but older sister, the Oxford Farming Conference down the road.  The other lot invited Caroline Lucas to speak – so could hardly have been surprised when she called for a meat tax: and NFU President Minette Batters called for farming to be zero emissions by 2040.

Ten years on, the Real Farming Conference has made a huge contribution, not just to building the movement, but to changing the conversation.  And still I left with mixed feelings.

My favourite session was learning about the animal health benefits of agroforestry and how the tannins in trees can reduce methane emissions as well as inhibit parasitic worms. I learned about method of production labelling for animal welfare in Denmark.  I also helped to run a good workshop on land reform in Scotland, reflecting on the genuine achievements as well as the challenges ahead.

But I’d spent much of the journey down reading Tom Devine’s new book on the lowland and highland clearances.  It’s full of insights into what shapes farming and land use: soils, rainfall, climate change in the Little Ice Age of the late 17th century; the geography of the uplands and the in bye; the trade ban on Irish cattle; the boom and bust in prices from the Napoleonic war; the imperative of landlords to increase production so rents could go up; the impact of technology on labour needs, and the greater attraction of the cities compared to the drudgery of farm labour.

Some future Tom Devine will document if in 2019 real farming was at the beginning of a new song , or the end of an old one.  Some days it feels like winter is coming.

Nourish is a membership organisation and our members are hugely important to our success. If you share our vision of what a healthy and sustainable food future looks like, please consider joining us as a member today.