This blog post by Charlie Hanks is the fifth of a series of reflections written by participants of the Food Leadership Programme, organised by Nourish from the 12th – 17th of July.

Who do you eat with?

On Day 1 of the Nourish Food Leadership Programme, with each guest asked to bring with them their biggest question about the food system to share with the group of strangers, this was one of the 26 that emerged. A very small, big question. 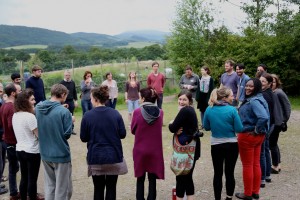 For the rest of the week we talked a lot about ‘What’ we eat. We analysed a sugar sachet for what it could tell us about the food system; we discussed the negative impacts of conventional farming; we visited local producers. And we asked, in what world does a supermarket frozen lasagna make sense?

A hard search for the answer began with the question ‘Where?’. Where is our food grown, processed, bought and sold, and where do we eat it? Do we need shorter supply chains? Do we need different places to buy and eat food? Could equal access to good food be made concrete in Scottish legislation?

And of course there was plenty of ‘Why?’. A whistlestop lecture on the history of food in Scotland gave us some insight, seeing the stumbling climb towards notional national food security match the gradual slide towards food as a commodity; and a look at how the fact that food as an essential right fails to merit substantial government policy in the UK indicates little movement away from that paradigm or chance for our crippling disconnect from food to be redressed.

Which brought us back, and we kept coming back, to that question: ‘Who?’. Who do you eat with? I spent the week eating with 30 most open-minded, supportive, radical-thinking people and I came away believing we can change how we eat by changing who we eat with, in the broadest sense. Were we to consider with every mouthful who was involved in getting it there, we could but question our reliance on convenience and anonymity in our food. We would value more than ever the people who produce it, the people who cook it and the people we share it with.

We called ourselves Food Leaders, a term none of us felt entirely at ease with. Until, that is, we had the chance, as part of the course, to speak to some equally unassuming leaders of social change in Scotland; all their stories hinged on chance connections with others, resumed after adversity thanks to steadfast allies. Building a better food system is a movement of people not for people. It is not about each of us fighting our corner; it is about shared activity, it is about leading by doing, by practical example.

As the programme drew to a close, we began to think more carefully what that would involve. The pledges the group made were about “sharing”, “community”, “networks”; but, more than that, they involved “growing”, “crofting”, “teaching”. Quite giddy with the momentum, we also came up with vision for a future Scottish food landscape. It is a landscape filled with people. The land belongs and gives to the people and the people belong and give to the land. Food is no longer used for fuel, as a commodity, as a status symbol. Food is accessible, shared, everywhere and alive.

We strive for a food system that values people and life, be it farmers or farmland or folk on the street. and there is enormous potential for that in Scotland. We will create new spaces to grow, to work the land, to eat; to be together and welcomed. A new food system needs new forms of hospitality.

Who will you be eating with?