The Scottish Parliamentary election on May 9th 2016 was a chance to find out what political parties will do to improve the Scotland we all live in and how they will do it. What could be closer to home than the food we grow and eat and our natural and built environment? 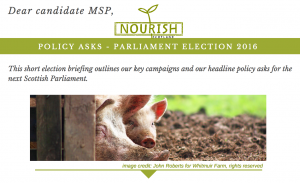 #1 Incorporate ICESCR in to Scots Law

Nourish are one of many NGOs calling for the full incorporation of the International Covenant on Economic, Social and Cultural Rights into Scottish law. As part of our Right to Food campaign, we focus particularly on the right to an adequate standard of living, which is in the Covenant. Elli Kontorravdis, our Policy & Campaigns Officer, explains why and how this is important: read more about it here.

#2 A Food, Farming and Health Act

Nourish are part of a growing civil society coalition that is working for a joined-up approach to transforming the whole food system. We are calling for primary legislation to be introduced in the next Parliament to facilitate this transformation: A Food, Farming and Health Act would aim to shift our food system towards one that is environmentally sustainable, socially just and delivering high levels of well being. Read more about it here.

# 3 Invest in the Future of our Farming

Nourish are calling for investment in a farming system which can feed our people, protect our environment and contribute to our communities. We think that any public funding for farming should be given to activities that result in public benefits rather than private gain. Our future farming model must be greener, promote better connections between our producers, consumers and communities and be based on producing healthy, affordable and high quality produce. Read more about it here.

We are calling for a Retailers’ Levy that would tax the ‘health difference’ between what we’re sold and what we should buy to sustain healthy diets. As overweight and malnutrition have reached pandemic dimensions in Scotland (and the UK), it is time the Government implements strong policies that will make it possible for people to eat accordingly to national dietary guidelines. This means placing responsibility where it belongs. Read more about it here.

#5 Organic and local food in our public kitchens

Scotland is getting left behind other European countries in making our public food more sustainable. Nourish are asking for a target of 20% local and organic food served in our Scottish schools, hospitals and other public places by 2020. We think it’s time for our public bodies to demonstrate leadership and use public money for public good, and that we need to use the new Sustainable Procurement Duty to ensure support for sustainable food and shorter supply chains and to give our organic sector the market confidence boost it needs.  Read more about it here

Nourish wants to see the community sector thrive with communities owning, managing and supporting activity throughout the circular economy of food. We’re calling on the Scottish Government, amongst other things, to establish a Community Food Development Fund, to support a national farmland trust and to include the right to healthy and sustainable food in the National Performance Framework and Single Outcome Agreements. We also argue that building ‘food democracy’ is part and parcel of community empowerment. Read more about it here.

Where do candidate MSPs stand?

In April, Nourish Scotland and Royal Society for the Protection of Birds (RSPB) Scotland hosted four Candidate Cafes, or Hustings, on the theme of food and the environment to give you a chance to ask your questions to Holyrood candidates in an informal surrounding.