Edinburgh’s Royal Mile was surprised by an unusual addition to the regular offering of tours and street performers this Sunday. A colourful pop-up, public dining experience called an “Eat-In” sprung up under the imposing bulk of St Giles cathedral, marking the launch of the Slow Food Youth Network Scotland. 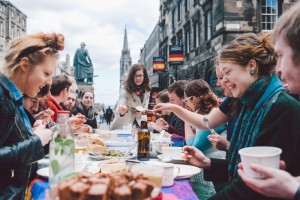 A dozen or so young people seeking to establish this international movement in Scotland, set up chairs and tables and dished up home-cooked food all with a personal story attached. Intrigued passers-by were invited to join them at the table, take time over a plate of food, and talk about why food is meaningful to them. A family from the Faroë islands explained to the table that many people on the islands still know how to turn every last bit of the sheep they raise into food, although food imports are rising and skills are being lost. A couple from Detroit proudly reported that 30 acre urban farms are thriving right in the centre of their city. A woman establishing community gardens in Glasgow concluded that these kinds of convivial feasts are the way forward for her community; “Out with soup kitchens!”

The Eat-In was born in San Francisco in 2008 as a peaceful protest against fast, cheap convenience food. Eat-Ins can involve from 6 to 600 people, and have often been hosted by Slow Food; the global, grassroots organisation that links the enjoyment of food with a commitment to community and environment.

The Royal Mile Eat-In celebrated the launch of the Slow Food Youth Network in Scotland, which hopes to provide a platform for young people across the nation to cultivate dialogue and create action around food issues. The Scotland chapter was initiated by Charlotte Maberly, lecturer and co-creator of the UK’s first MSc in Gastronomy at Queen Margaret University: “SFYN Scotland is a growing group of young people who believe everyone has the right to good, clean, fair food. We’re a diverse bunch, with young farmers, entrepreneurs, food justice advocates and concerned eaters, all coming together to do what we can to communicate the importance of food.”

At 3pm, the leftovers were packed up in tupperware, the crumbs shaken off the tablecloth, tables and chairs neatly folded up as if nothing had happened. But hopefully it was the very beginning of a Good Clean Fair food revolution for Scotland’s youth.

The Slow Food Youth Network will be organising more events in Scotland in the near future with an Eat-In in Glasgow already in the pipeline. 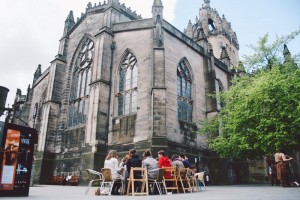 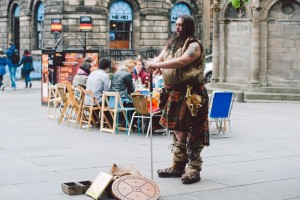 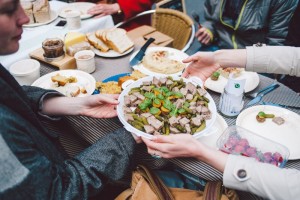 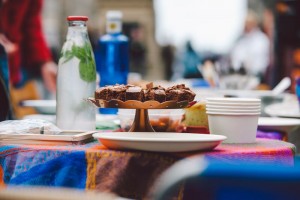 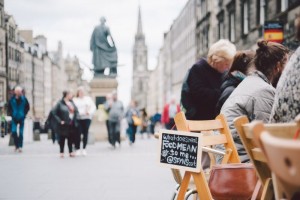