New boots on the ground: helping new entrants make a living from farming and growing

They say the only way to make a small fortune from farming is to start with a large one.
But what about people who want to grow food for a living but haven’t got a fortune at all? 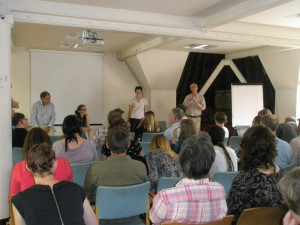 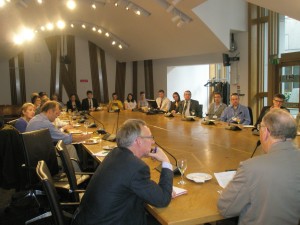 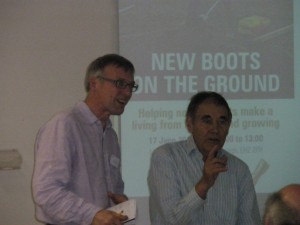 At this event we heard about exciting projects which are helping people to get access to land and to get real food to people:

Key points of the talks:

Access to land is one of the major obstacles for new entrants into small-scale food production. Throughout Europe there is a trend of decline in agricultural land and a trend towards ever-bigger farms. Land prices are rising and prices are far in excess of the return that could be gained from the agricultural use of the land. Terre de liens in France have developed an effective model to keep land in sustainable agricultural use and Sjoerd Wartena (founding member and current Chair of Terre de liens) told us about it.

At the bottom you can find several papers from Terre de liens. The main points of Sjoerd’s talks in the morning at the Melting Pot and in the evening in the Scottish Parliament are summarized below.

10.000 farmers stop farming per week in Europe. As a society the question we have to ask ourselves is: Do we really want small-scale farming to disappear and have industrial farming take over? In Sjoerd’s village are four small farms that live without subsidies, which shows that we can choose which sort of agriculture we want to have.

Sjoerd described Terre de liens (Tdl) as a laboratory of organizing land ‘for the common’ by civil society and liberating land from the market forever.

Initially, Tdl’s main activity was to advise and support farmers wishing to set up collective land ownership structures. Tdl made its breakthrough in 2007 with the creation of a private company limited by shares, la Foncière.

As a company, la Foncière can undertake public share issues to raise capital. As a company limited by shares, it creates two categories of participants: the shareholders, who provide capital and are liable only to the extent of the capital provided; and the managing partners who run the company and are jointly and severally liable for the debt. The status of the Foncière thus separates those who own the capital from those who decide on how to invest it and run the company.

This separation ensures that the land bought by la Foncière is forever owned and managed to serve the long-term goal of preserving agricultural land in good heart and sustainable production for the sake of future generations.

A first public issue of shares exceeded all expectations by raising €4 million from 2200 shareholders in only 5 months (the objective was to collect €3 million in 9 months). In 7 years la Foncière collected €36 million. One third (€9 million) is kept in reserve to ensure that investors can withdraw their money at any time.

A share costs €100. Shareholders do not receive interest rates for their investment but up until 2010, the main financial incentive for shareholders was a tax rebate of 25% of their investment in the Foncière. The change in the tax system has nearly eliminated this tax rebate. Although this has slowed down the pace of share issues, only 20% of shareholders withdrew their investment. This shows that the majority of the investors are more interested in ethical considerations than financial return. Sjoerd suggested that this high support might be linked to the fact that in France a lot of people have still a direct connection to farming through relatives or family.

Sjoerd called the Common Agricultural Policy the biggest scandal of the EU, with 50% of the money going to 25% of farmers. Although we can’t change the CAP now, governments can give tax advantages for investing in sustainable farming. This is also one of the points he raised with Scottish civil servants involved with land reform in a separate meeting in the afternoon.

Many authorities in France are interested in promoting sustainable local farming. Because local authorities are not allowed to invest in private companies nor make donations to an endowment fund Tdl set up a land trust. Setting up the land trust was a very bureaucratic process which took 5 years. For local authorities to buy land and donating it to Tdl is a way to keeping land in sustainable agricultural use for perpetuity, because if the land was simply bought by the local authority it could be sold again by a newly elected local government. The land trust can be compared to the British National Trust except that the land trust has a focus on preserving organic/biodynamic and peasant farming, a living cultural heritage. Nature conservation organisations have also bought land and given it to Tdl because they see that sustainable farming is applied nature conservation.

In France the price of land is around €5,000/ha. In France the disappearance of small scale farming is not so much due to land prices but rather because of the dominance of the farmers union which strongly supports free trade and the global market economy. Given the low prices for agricultural produce the land price is still too high. But nothing compared to Benelux with prices of €70.000/ha or €30.000 in Scotland.

Since the prices are so high in Scotland we cannot simply adopt the French model. In Scotland we need a debate in society on whether we agree that land is seen as a commodity (and can be sold far beyond its agricultural use value) or whether it is part of the commons.

What plays out in favour of Tdl in France is a tenant friendly policy where the rent is set on an annual basis depending on how successful the harvest was. In France there is also strict land use designation and land designated as agricultural land cannot be easily changed.

Tdl buy 20-25 farms per year and have so far helped around 200 farmers to access land of an average size of 15ha. The methods used are organic/ biodynamic and peasant farming.

Sjoerd emphasised that all change comes from civil society and that the government will listen if we join forces and speak with one voice. Because of their 10.000 supporters and their results on the ground (e.g. job creation, nature conservation through leases bound to conservation rules) Tdl have become respected by the government: they are asked for advice, make proposals for legislative amendments and work with scientific institutes.

There are similar initiatives throughout Europe, but they are all scattered. Terre de liens got involved with an international network and together with Via Campesina (international peasants organisation) and IFOAM (International Federation of Organic Agriculture) they are working to raise the profile of small scale farming in Brussels.

Manchester Veg People (MVP) want organic food for everyone. Organic is not a niche. Everyone has the right to nourishing food.

MVP is a cooperative of growers, restaurants, caterers and public sector organisations. MVP facilitates the exchange between growers and buyers by doing annual crop planning. Growers decide between them what they will grow and make a list of produce from which chefs can choose and say how much of each produce they will want to order over the growing season.

Manchester University was one of the first buyer members. In order to increase demand and make organic food more widely available MVP also started to work with schools. MVP realized that if demand from the public sector increases they also need to increase production. To this end they set up a volunteering scheme on organic farms. The practical work was soon complemented by a course taught by the growers themselves. Asking the growers to teach was an acknowledgement that their knowledge and know-how is valued.

Since the course was not enough to give people the confidence to start their own businesses, MVP set up “Farm Start”, the first incubator farm in the UK which offers new growers access to certified organic land, training and mentoring, market access and peer support.

At the moment MVP is grant dependent but by March 2015 they want to become a viable business.

Growing Livelihoods is a new initiative from the Carnegie Trust supporting new entrants into small-scale farming. It builds on a connection starting in 1934 through the Land Settlement Association, a pioneering scheme which enabled thousands of people to achieve livelihoods as food growers through collaborative approaches including central marketing of products, access to tools and machinery, packing facilities and propagation facilities.

The Growing Livelihoods pilot scheme will run from Aug 2014 to Aug 2015 with 4th July being the closing date for expressions of interest.

The New Farmer Programme is providing 24 would-be growers with the experience and skills they need to grow and market their vegetables and run a business. Clare showed a video where current participants explained how the programme will (and in some case already has) helped them on their path to becoming a small scale producer.

The Forestry Commission (FC) owns 9% of Scotland’s land. 650.000 hectares are under FC ownership out of which 23.000 hectares are agricultural land. The FC’s aim is to promote integrated land use. The starter farm can be run part-time and offers an alternative to the traditional full-time farming model.