A nitrogen budget for Scotland?

One of the emerging ideas from the Bitesize gathering on climate change at ECCI last Friday (9th September) was a nitrogen budget for Scotland. 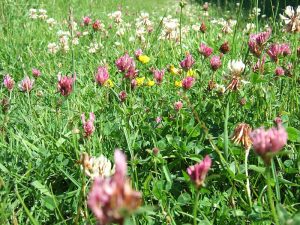 Each year we add around 129,000 tonnes of manufactured nitrogen fertiliser to crops and grassland in Scotland, and this figure has been static for several years.  Producing and applying this fertiliser generates around 475,000 tonnes in CO2 emissions.  Then there are nitrous oxide emissions from the soil as a result of spreading fertiliser and manure, which accounts for a further 2.7m tonnes of CO2 equivalent[1].

So nitrogen fertiliser use accounts for at least 5% of Scotland’s greenhouse gas emissions.  Reactive nitrogen has other impacts too – it gets into watercourses and disrupts aquatic ecosystems, creates ammonia pollution, and influences soil biology as well as the nutritional content of the crops.

And of course it boosts crop and grass yields, though the European Nitrogen Assessment[2] shows that the benefits of this are outweighed by the costs (which are largely externalised).

The impact of a nitrogen budget would be to sharpen up the way we make, use and recycle nitrogen in Scotland.  We’d pay more attention to clover, which fixes nitrogen biologically, works well with grass and improves milk and meat quality.  We’d breed more nutrient-use efficient grasses to work with clover instead of chemical nitrogen.

More farms would go organic, producing slightly less per acre but with lower inputs and a higher farmgate price they would be more profitable.  More organic produce would boost Scotland’s green offer for tourists and provide valuable exports, including organic whisky..

We’d be much more careful about how and when we apply bagged nitrogen and slurry so less gets lost to the air and water.  And we’d pay much more attention to recycling the nitrogen in food waste and human sewage.

A nitrogen budget for Scottish farming, combined with support and advice for farmers and a co-ordinated effort to minimise nitrogen losses throughout the food chain, could make a major contribution to Scotland achieving its next set of ambitious climate change targets.